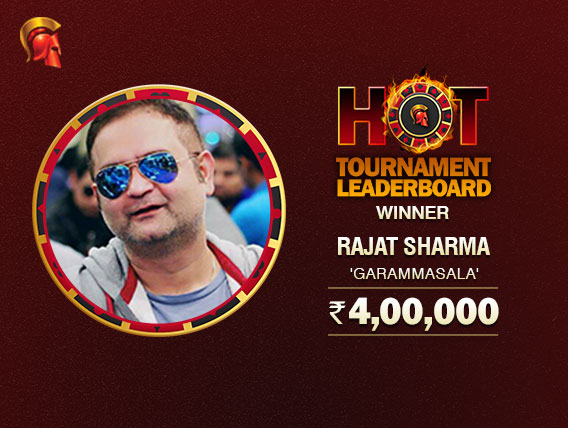 To be eligible for Hot tournament, you had to participate in the maximum number of Spartan featured tournaments and Sunday tournaments like Big Daddy, Sunday Speedster and Triple Bubble. The Hot Tournament Leaderboard spanned across the month of September from the 1-30 Sep.

Rajat Sharma aka ‘Garammasala’ topped the Hot leaderboard and won the top prize of INR 4 lakh. Sharma is not a new name in the online poker circuit as he has several wins under his belt. Some of his latest wins in the month of September include shipping the Mega Freeze and also winning the SSS Sunday Superstack. The rest of the INR 6 lakh was divided into the remaining 9 table finishers.

Most of the players in this list are regular players on The Spartan Poker. Anirban Das aka ‘pokernoob’ came in 2nd and won a sum of INR 2 lakh, while in 3rd place was Arjanveer Chadha aka ‘instrumental’ and he won INR 1.2 lakh. On number 4 and 5 were Akshay Nasa aka ‘Sherlock52’ and Sumit Sapra aka ‘mrgr33n’ and they took home INR 90,000 and INR 60,000 respectively.

Other notable players on the top 10 list of the Hot leaderboard were Goonjan Mall (8th) aka ‘gmtesting’, Ashish Ahuja (9th) aka ‘Spewushhhiiiii’ and Sahil Mahboobani (10th) aka ‘ImHighIShove’. Not many times have we seen so many high-profile players all battling it out together for the top spot. Keep reading GutshotMagazine.com for more updates on Indian poker promotions.