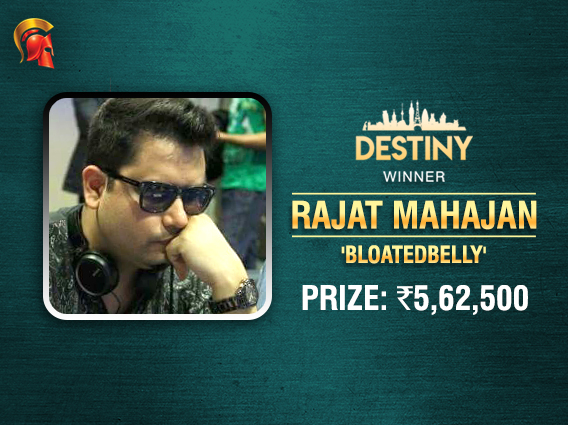 
The Destiny tournament series is one of the most popular offerings on The Spartan Poker, where one winner every ten weeks gets to take home an INR 10 lakh package trip to play poker at an international location. Destiny 6.0 is currently underway, and the winner of this season will take away a package trip to play in Europe!

The way it works is that every Wednesday, one player will take away Destiny tournament winnings including an INR 1 lakh ticket to the Destiny SnG Finale. Yesterday was Wednesday and another INR 25 lakh GTD Destiny tournament was contested on Spartan, kicking off at 7:30pm.

Continuing a brilliant run in online poker and shipping last night’s Destiny tournament on Spartan was none other than Rajat Mahajan aka ‘BloatedBelly’, who beat a field of 421 entries in this INR 5,500 re-entry tournament. The top 40 players were paid a minimum of INR 15,000 but Mahajan took away the biggest prize of INR 5,62,500 to go with an INR 1 lakh ticket to the Destiny SnG Finale.

Finishing in second place was ‘omgwonderwoman’ who also won a handsome prize of INR 4,12,500. It was Level #55 of the tournament when it came to an end with the blinds at 25,000/50,000 – 5,000. Mahajan overcame a deficit to get a chip lead of around 5:1 before the final hand. He won this final hand with Aces and Fours, over his opponent’s pair of Fours that he/she hit on the board itself.

Gutshot caught up with Mahajan after he took down this major tournament. He said, “The experience was of course amazing. This victory was special in terms of score and the field. The final table was tough with really consistent players such as Sumit Sapra (who got coolered and finished 3rd). Heads-up, my opponent ‘omgwonderwoman’ had a 4:1 chip lead and was playing well and quite aggressive from the start. But I ran good HU and in no time the situation was reversed. Now looking forward to the Europe package SNG!”

Just the previous night, Mahajan, who plays under the name ‘Happyfish’ on Adda52, won their Judwaa tournament for INR 1.6 lakh and last week, he beat 347 entries to win The Vegas tournament on PokerBaazi for a prize of INR 1,38,800, so this guy is raking in the profits from all the major online poker platforms in India at the moment. Keep reading GutshotMagazine.com for more updates on the top tournaments in the country.