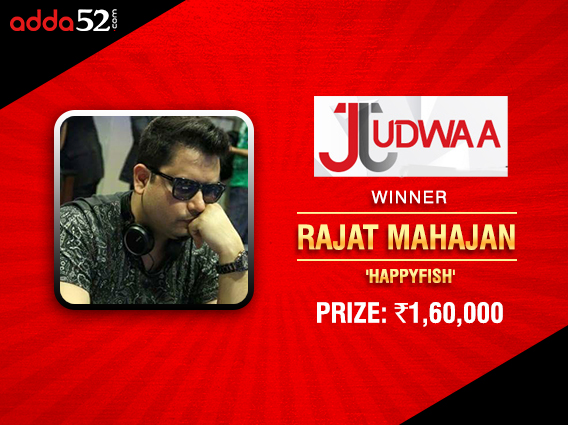 
For those who are wondering, Judwaa is one of Adda52’s featured tournaments that takes place twice a week, every Tuesday and Wednesday night at 8pm. These are among the biggest tournaments taking place every night on Adda52 and yesterday, another Judwaa tournament was hosted on their platform.

The INR 5 lakh GTD Judwaa kicked off last night with a buy-in of INR 2,750 and by the end of the late registration period, there were a total of 139 entries, including 86 players and 53 re-entries, slightly missing the advertised guarantee. The tournament is always in direct competition with PokerBaazi’s Endeavour, which Rubin Labroo won last night.

Coming back to Judwaa, it was a 5-hour and 20-minute grind before a winner was declared in Rajat Mahajan aka ‘Happyfish’. This player has had a few wins in the past, including winning the Sunday SuperStack title on Spartan last month. Now, he added another title to his achievements, including an addition of INR 1,60,000 to his poker bankroll.

He beat a tough field, including ‘chinunew’ in heads-up, who walked away with the runner-up prize of INR 97,500. Finishing in third place was Mihir Thakkar aka ‘gameofdeath’, who won INR 70,000 after finishing second in The Roar on Adda52 just the night prior to this. Eventually, only 9 players were paid out with a minimum cash of INR 12,500 but Mahajan took away the biggest profit from among them.

Gutshot caught up with Mahajan after he won this Adda52 featured tournament. Talking about the experience, he said, “The tournament structure is decent as starting stacks are 20k/200BB – with blinds changing every 10 mins. I used only one bullet – and ran good from the start – I don’t remember chipping down significantly at any point. I picked up a lot of premium pairs at some nice spots. On the FT, I was 3rd in chips when 6 players were left. Once it was heads up, and although the opponent had more than double my stack – I felt confident that I can turn this around – and fortunately I did.”

Keep reading GutshotMagazine.com for more updates on the biggest poker tournaments in India.