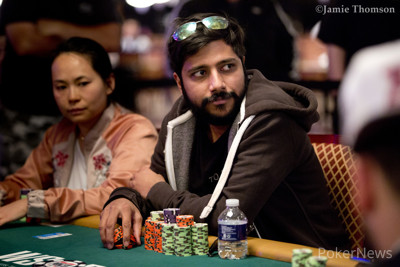 
The last couple of days have seemed to be good ones for Indian poker players at the 2018 World Series of Poker, an annual tournament series held in Las Vegas. Recently, Paawan Bansal cashed for 74th in a Double Stack event, followed by Aditya Agarwal finishing 45th in a $1,500 NLHE event.

Now, it’s Raghav Bansal who is in the limelight – one of India’s most decorated poker players with nearly a million dollars in live poker cashes. He registered to Event #39: $1,500 No-Limit Hold’em Shootout and out of the 908 registered entries, he is among the top 100 to progress to Day 2 of the event.

He is the only Indian among this tough field which includes the likes of past WSOP Main Event champions Scott Blumstein and Martin Jacobson, a few other bracelet winners and 14-time bracelet winner Phil Hellmuth. A cash prize is guaranteed for Bansal as the top 100 players will be paid out a minimum of $5,227. Bansal has done really well to get here, and it will take quite a big effort from him to make a deep run tomorrow, as quite a few champion players will be aiming for that top prize of $236,498.

The latest to join Team PokerStars India, Muskan Sethi, also registered to this event, but she busted earlier than she would’ve wanted. Bansal has been a regular part of WSOP tournaments in the last 2-3 years and has a massive best cash of HKD 2,610,000 ($335,910) that he won for finishing second at the PokerStars Championship Macau High Roller Event last year.

Romania’s Vlad Darie currently holds the chip lead with 73,200 chips and Bansal has a pretty good stack of 66,400 himself. Remember, he also finished 21st in the Millionaire Maker Event recently. GutshotMagazine.com will be following his progress tomorrow so keep watching this space for more updates from the tournament.