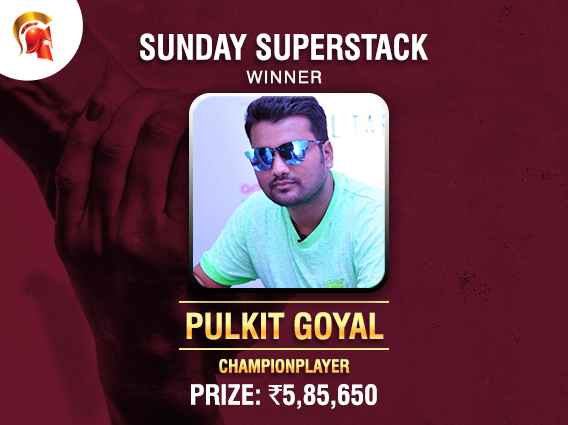 
The Spartan Poker hosts featured tournaments every day of the week and Sundays are thus famous for the Sunday SuperStack tournament. Yesterday’s SuperStack, however, was hosted with the intention of donating all the revenue generated from the tournament towards the Kerala Relief Fund.

The Sunday SuperStack INR 20 Lakh GTD tournament had a buy-in of INR 5,500 and the INR 500 tournament fee from each entry went towards the donation that Spartan would make to Kerala. The tournament thus saw very good participation, with 442 entries beating the guarantee and creating a new prize pool of INR 22.1 lakh. A total of INR 2.21 lakh was thus generated towards the charitable cause.

It kicked off at 7:30pm last evening and came to an end 8 hours and 7 minutes later, with the top 40 players being paid out a minimum cash prize of INR 13,260. Coming out on top of this field was none other than Pulkit Goyal aka ‘Championplayer’, who took home the biggest prize of INR 5,85,650.

Goyal is a popular player in the online poker circuit, having won plenty of titles on Spartan in the past. His most recent victory was topping the IOPC Leaderboard, winning the grand prize of a brand-new Jeep Compass. Yesterday, the poker Gods were by his side once again, as he ran through this field and won after a 3-way deal was made on the final table.

For similar updates on the biggest poker tournaments in India, both online and live, keep reading GutshotMagazine.com.