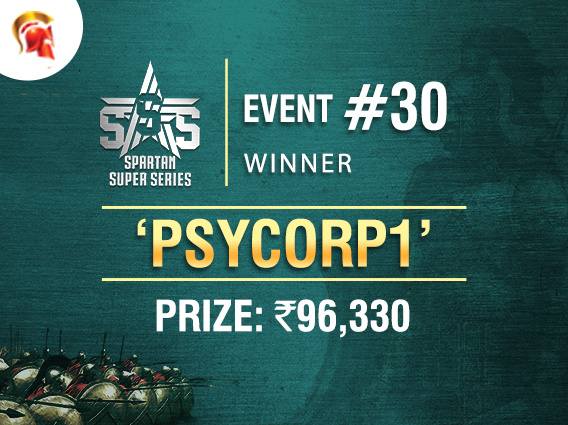 
The penultimate event of the penultimate day at the Spartan Super Series was Event #30 guaranteeing players a sweet 5 Lakhs prizepool to compete for. 300 players ponied up the INR 1,100 buy-in to participate and at the end of it all, it was ‘Psycorp1’ who outlasted the field to claim the title and top prize at The Spartan Poker.

The prizepool ended going past the guarantee giving players a shot at an amount of INR 5,07,000 but only 45 players would see a piece of that. Min-cash going each money finisher’s way was INR 2,788. Bhanu Prakash a.k.a ‘spectre’ ran deep to finish just out side the top 10 while former India Online Poker Championship (IOPC) title winner ‘equity_hunter’ was also a known name to make it deep finishing on the FT in 6th place for a score of INR 25,350. But it was one of the recognisable faces of India’s live and online circuit, professional player Sumit ‘mrgr33n’ Sapra who came into contention for the title against Psycorp1.

It took just under 6 hours to get into head-up when mrgr33n dispatched the short stack of ‘Jannat52’ to the rails in 3rd place (INR 46,897) when his pocket Sixes turned a full house against his opponent. mrgr33n was in the head with 2.5 million chips while Psycorp1 had just over 1.5 million. That figure dropped to a million when mrgr33n took a chunk of chips as his Qx 9x hand hit top pair on the flop winning over the Big Slick of Psycorp1. The latter however managed to bring it back to an even contest when his Ace Queen made a full house against mrgr33n’s set. The big shift in stacks happened when mrgr33n (8d As) paid off Psycorp1 (7d 7c) a 2 million plus chip pot when spiked a set on this board Kh 8c 7h 2c 9h. The momentum from thereon continued in Psycorp1’s favour to see him through to the final hand. Using the advantage of his big stack, Psycorp1 (3h Kd) moved and got a call from mrgr33n (Ac 4h). Tough luck for the latter as the board Ks 6s Kh 3d Td just ended any chance of a comeback giving Psycorp1 his first title of this Spartan Super Series and a payday of INR 96,330. mrgr33n must be thinking, “So close yet so far…” as he falls just short of a third SSS title in this series. He will be a bit soothed however by his nice score of INR 69,712 though.

Stay tuned as we bring you the final SSS event round-up in just a little while right here on GutshotMagazine.com!