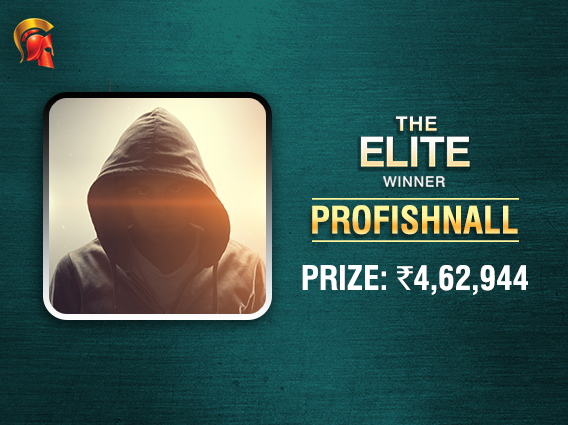 
On Fridays, there isn’t just one major tournament on The Spartan Poker, but two. We recently reported news of Puneet Dhawan winning the Triple Bubble tournament last night after a 3-way deal, and we’re here to report the winner of The Elite that was also contested last night on Spartan.

The Elite INR 18 Lakh GTD is a 6-Max tournament that is meant for poker’s elite group. With a massive INR 11,000 entry fee, only the best can afford to play in this tournament and you generally witness some of the toughest fields while playing in this weekly offering.

Yesterday, 184 entries participated in the tournament, taking the prize pool up to INR 18.4 lakh and from these, the top 17 players shared the prize pool with a minimum cash of INR 28,888, giving a nearly 3x return on investment to those who reach the money pay-out stage.

It was just over a week back that the SSS Super HighRoller was held on Spartan, where ‘Subway31’ emerged victorious. Finishing in second place in that tournament was ‘profishnall’ who took home a whopping prize of nearly INR 10 lakh for finishing second. Once again, this player made an impressive run in a high buy-in tournament on Spartan.

However, he wasn’t going to settle for another runner-up position, last night shipping The Elite for the top prize of INR 4,62,944, beating ‘equity_hunter’ in heads-up. It was a long grind that began at 8:30pm last night and ended at 3:20am this morning, where equity_hunter was the last to be eliminated, taking away the second-place prize of INR 3,12,800.

The final hand took place in Level #38 of the tournament, when the blinds were at 9,000/18,000 – 2,250. profishnall had a lead of over 2:1 over his opponent and he decided to raise all-in pre-flop after being dealt Tc Td in what became the final hand. equity_hunter made the call with Kd Qh.

As both players flipped over their cards, equity_hunter would’ve known that one King or Queen on the board would put him in the lead, but it wasn’t to be as the board rolled out 8s 6d Jd 6c 5s and profishnall won with Tens and Sixes over his opponent’s pair of Sixes from the board.