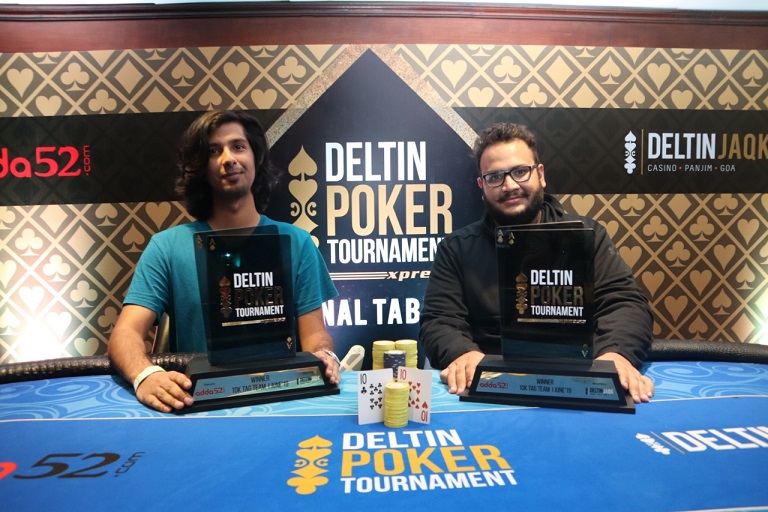 
The Tag Team tournament format in poker happens to be the most popular among us Indian players. We have two WSOP gold bracelets and both of them won by Aditya Sushant (2017) and Nikita Luther (2018) came in the Tag Team Event in Las Vegas. Here in India, we recently finished with the INR 10k Tag Team Event at the Deltin Poker Tournament Xpress (DPTX) series in Goa.

The tournament series came to an end on 9th June and this was one of two tournaments to conclude on the final day. Played on-board the Deltin Jaqk casino in Goa, the event attracted a total of 25 teams from which the duo of Pratibh Saluja and Adarsh ended up as winners.

In terms of the prize money up for grabs and even in terms of participation, this was the smallest tournament of the series, but it still beat the previous Sikkim turnout of 17 teams. Here, Saluja and Adarsh ended up taking home the biggest prize of INR 1,10,000 after they beat Team Amit Singhal and Ashu Kalra.

Before they reached heads-up, they had a brilliant run coming towards the end stages. 5 of the 8 teams on the Final Table were sent to the rail by Saluja and Adarsh and it was only fitting that they were crowned winners. In the final hand, Saluja shoved with pocket Tens and the shorter stacked Singhal made the call with Ah 8h. Even though he flopped a pair of Eights, he couldn’t beat Saluja’s Tens and the team had to settle for INR 66,000.

Stay tuned to GutshotMagazine.com for all things poker, including tournament results from India and around the world.