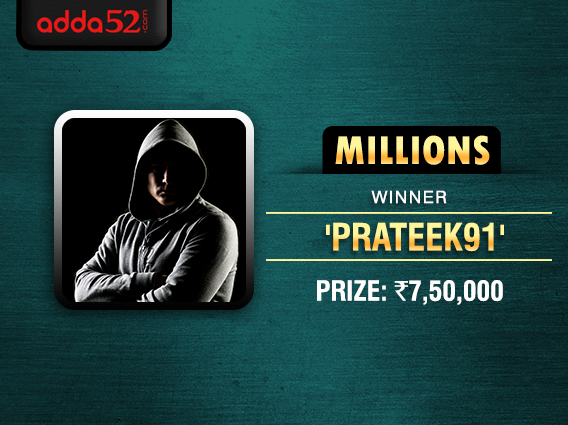 
The Sunday grind is something that every poker player in India looks forward to each weekend. Most of the top poker companies schedule their main tournaments for this day of the week and on Adda52, it is the popular Adda52 Millions INR 20 lakh GTD that is contested every Sunday at 8pm.

The tournament kicked off as scheduled last night and everyone would’ve had their eyes on the INR 7.5 lakh GTD first-place prize. Only the best take part in this tournament, one with a steep buy-in of INR 11,000 and an INR 20 lakh GTD prize pool. Yesterday, it was ‘prateek91’ who topped the field and took away top honours.

The player won all the fame and glory when he beat the field of 219 entries to win the tournament. These entries beat the guarantee and created a new prize pool of INR 21.9 lakh, which was shared among only the 15 players with a min-cash of INR 27,375. 8 hours and 46 minutes after it began, the tournament ended with prateek91 winning the massive top prize of INR 7,50,000!

Now a lot of eyes would’ve been on S Saravanan aka ‘SIDDHU24’, who won this tournament two weeks in a row before last night, but he didn’t make it to the money this time. Other known players to reach the pay-outs were Anish Patra aka ‘anishpatra’ who finished 3rd, Adda52 Team Pro Kunal Patni aka ‘KunalPatni’ who finished 12th and Neel Joshi aka ‘neeljoshi23’ who finished 13th.

The tournament came to an end a little before sunrise time in India, when prateek91 beat ‘nerdguy’ in heads-up. However, the latter wouldn’t be too disappointed, as he was well rewarded too, winning INR 3,77,775 for finishing second. Keep reading GutshotMagazine.com for daily updates on top Indian poker tournaments, both online and live.