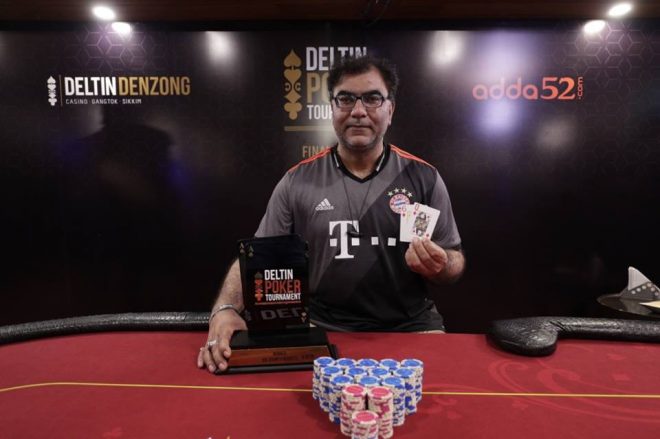 
All the attention is on the Deltin Poker Tournament Xpress (DPTX) which is currently being played out at the Deltin Denzong in Sikkim. The first of its kind in the state, players were excited to be a part of the live action, and we now have another result to report to you, after Vivek Anand Baskey won the opening tournament.

The next tournament to be played out was the DPTXpress INR 10k Bounty Event, which saw another healthy participation of 48 entries. All of these players coughed up the entry fee of INR 10,000 but only the top 6 were paid out eventually, with a minimum pay-out of INR 14,000.

It was a long night at the casino and after 13 levels of grinding, we had a winner in Prashant Malik, who walked away with the top prize of INR 90,000. The blinds had reached 5k-10k and the Big Blind Ante was running at 10k when the final hand took place at Malik was declared winner.

Malik was up against Rishav Gupta in this final hand. Gupta held Q2 off-suit here, while Malik was slightly ahead with Qd 6d. Gupta, being the shorter stack decided to shove all his chips into the pot when the flop opened 9d 8h Qc and he hit a pair of Queens. However, he would’ve realized he was behind after the players revealed their cards.

The turn and river cards opened 4d and 3c and Malik went on to win the pot with a pair of Queens and a higher kicker, Six. This was good enough to win the beautiful DPTX trophy while Gupta took away INR 53,000 for finishing second. GutshotMagazine.com wishes to congratulate Malik and you can keep watching this space for more updates from the DPT Sikkim series.