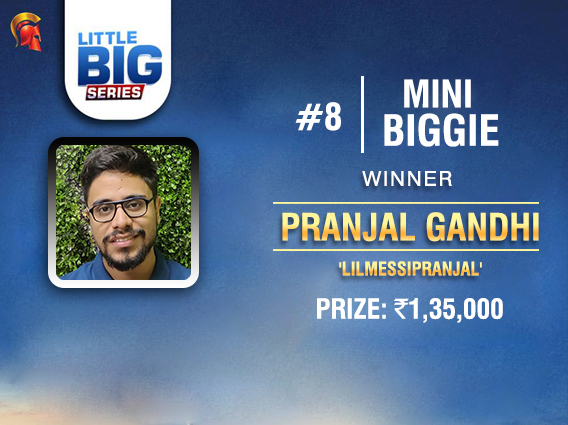 
After an exciting first day of action at Day 1 of the Little Big Series (LBS) on Thursday, it was time for another five events to be bagged at The Spartan Poker. The big winner of this day was Delhi-based player Pranjal Gandhi who plays as ‘lilmessipranjal’ at Spartan. “Really happy to have won a 6 max MTT that had a tough field,” said the 26 year old player who had to face and outlast a number of regs at the final table on his way to the title.

We’ll take a look at his win in a bit but here’s a round up of the day’s action from the LBS yesterday:

222 entries came together in this tournament and 30 from those would get paid out in the first event of Day 2 of the LBS. ‘Gaurav691’ and ‘kumarsh’ would remain in the end to battle for the title. Gaurav691 was behind by a 10:1 deficit but he didn’t make it easy for kumarsh as the headsup battle went on for a while. The difference though was too much and eventually with a better two pair of Queens and Eights, kumarsh won the title and top prize of INR 10,500.

A slightly higher guarantee in this second tournament of the day which saw 148 entries take part. It was ‘Falcon Prince’ who outlasted that field including ‘moneymaniac’ in headsups for the title. It was a long drawn headsup where Falcon Prince who had the lead lost it and then regained it before winning it all with a turned pair of Nines against his opponent. For the win, Falcon Prince took home INR 14,400.

Event 7 carried the same guarantee as the previous tournament but unlike the Rebuy+Addon format of the earlier one, this tournament was a Freezeout, the only one of the day in fact. 191 players took part and it was the appropriately named ‘SickRun’ who outlasted ‘Malicious’ in the final match up and for once pocket Jacks stood strong in the race against Big Slick to hand SickRun the title and first place prize of INR 13,200.

And that brought us to the final and biggest event of the day in the 500k GTD tournament with a buy-in of INR 2,200. 130 entries in this one and 20 players made it to the money with min-cash being INR 7,500. While a number of familiar players took part in this tournament, most fell short of the final table and from there it got down to ‘lilmessipranjal’ and ‘pokerram’ battling it out for the biggest prize of the night. The former held a 4:1 lead going into headsup but pokerram did not make it easy. Predictably it was a classic race of pocket Tens versus Ace Queen that brought an end to the tournament. On a board of 6c 2d Jd 6s 6h, lilmessipranjal rivered the full house to knock out his opponent and claim the biggest prize of INR 1,35,000 for the win. Gutshot spoke to the winner Pranjal Gandhi earlier today and this is what he had to say, “Really happy to have won a 6 max MTT that had a tough field.. had good regs on my table with 10 players to go, did manage to win flips against them and had a strong chip lead going into the final table, eventually getting the job done in the end. Also appreciate the effort you guys (Gutshot) put in by covering the winners across major websites.”

And that drew the curtains on another exciting day at the virtual felts of The Spartan Poker. Stay tuned to Gutshot as we bring you more updates from the Little Big Series tomorrow!