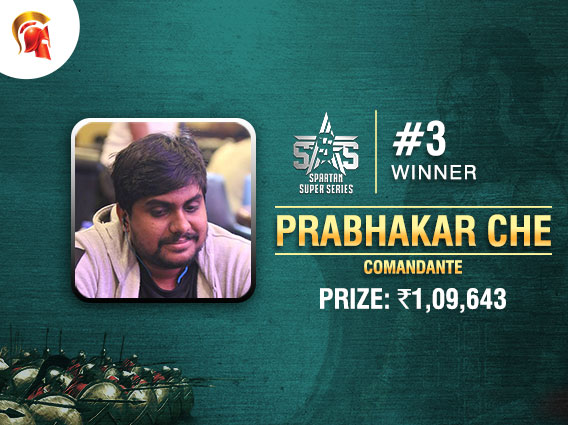 
INR 3.7+ crore is up for grabs in guaranteed prizes during this edition of the prestigious Spartan Super Series, where 37 tournaments have been scheduled on The Spartan Poker between 13-19 August 2018. Yesterday was the first day of this cash-rich series and after a couple of smaller tournaments, the third tournament kicked off at 6pm IST.

SSS Event #3 INR 4.5 Lakh GTD had a buy-in of INR 1,650 and a guaranteed prize pool of INR 4.5 lakh. The SSS series always attracts big fields and 330 entries to this tournament led to the guarantee being beaten and a new prize pool of INR 4.95 lakh being created. This was to be distributed among the top 27 players, with a minimum cash prize of INR 4,950.

royalking111 faced a 2:1 chip deficit against his opponent and decided to go all-in with Kd 5s after hitting a pair of Fives of the flop. Che held Ah Qh and the flop of 3h 5h 9d gave him the chance of an Ace-high flush. He would’ve put in some thought initially, but he made the call. He was behind on the flop, but 4h on the turn completed his Ace-high flush, leaving the 3s on the river to be completely inconsequential.

royalking111’s Fives and Threes wasn’t enough, and he took home the runners-up prize of INR 74,003. He also finished SSS Day 1 at #5 on the SSS Leaderboard, where a total of INR 10 lakh is up for grabs. Che was awarded comparatively more points for this win and he finished the day at #3 on the points leaderboard.

This is just the start of the SSS and the excitement is all set to increase on Spartan as the days go by. Keep reading GutshotMagazine.com for regular updates on the Spartan Super Series.