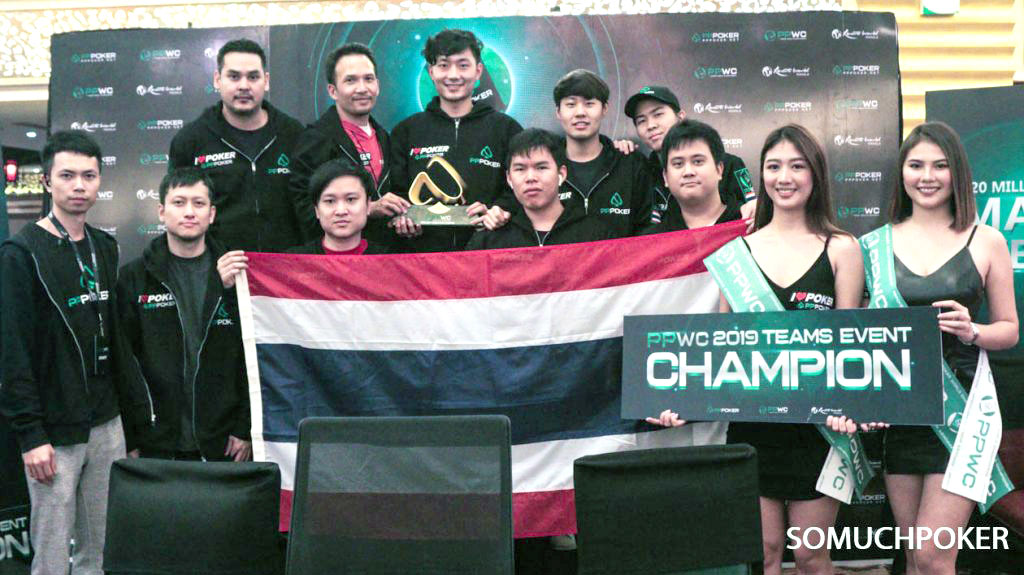 
Their footprint in the poker world is not very big but the nation or should we say, Kingdom of Thailand took a nice little step towards upping their reputation by taking down the prestigious Teams event at the 2019 PPPoker World Championship (PPWC). Along with a cool looking trophy, Team Thailand also scored a massive Php 7 Million (~INR 95 Lakhs) as first prize for their winning efforts. It was a strong performance from Thailand right through the three day event as they finished 3rd on Day 1 and scored the top spot on Day 2 before claiming victory on the final day of action. The PPWC is an offering from PPPoker, an online poker brand that has a strong presence in the Asian online poker where it was first introduced and over the past few years has become one of the big poker mobile platforms claiming to have thousands of users in over 100 countries.

15 action-packed events are taking place in this series which will run from 15-21 February at the Resorts World Manila in the Filipino capital. The Main Event, which has a PHP 20 million (~INR 2.65 Crores) guarantee, is the highlight of the tournament but the Teams event also drew a lot of interest and excitement from players located across the region. The Teams event will comprise of 9-player teams from different countries including India featuring a buy-in of PHP 550,000 (~INR 7.30 Lakhs) per team and was slated to take place over the first three days of the series. Team India consisted of Akshay Nasa, Kalyan Chakravarthy, Abhinav Iyer, Rishab Jain, Pulkit Totla, Sajal Gupta, Sahil Agarwal, Jasven Saigal and Aditya Sushant. The teams were to compete in three different formats – 6 Max SnG, double heads-up, and heads-up. Unfortunately, despite its strong line-up, Team India was unable to make Day 2 of this event.

The final match-up on Sunday took place between Thailand and Malaysia and had three formats mentioned above running simultaneously. And it got done almost before it even got started with the HU match ending after just one hand was played. And of course, what’s poker without hand-over-hand drama. According to an update from SoMuchPoker, with blinds at 25-50, Thai player Kannapong Thannarattrakul raised to 150, which his Malaysian opponent Ying Lin Chua three-bet to 550, Thannarattrakul four-bet to 1500, Chua five-bet to 3500, Thannarattrakul six-bet to 7k, Chua jammed his 20k stack, snap called by Thannarattrakul. Chua who flipped over pocket Kings and Thannarattrakul looking good to end things with his AxAx. A nothing board and a win in that format gave Team Thailand 30 points.

Next up was the Double Heads Up format which also went into the books in quick fashion this time in Malaysia’s favour when Ian Lee and Paul Teoh defeating Team Thailand’s Pakinai Lisawad and Sittisak Phetroj. It was a much needed win for Malaysia who took over the lead win this 40 point win. The final format was the 6-Max SNG which had three players from each team at each of the two tables. No quarter given or taken through that grind till it was finally down to two players left from each team. Unfortunately it would not be Malaysia’s day as they were the ones to lose a player and eventually succumbed in this two-against-one scenario to end up as runner-up in this first-ever PPWC Teams Event title. Not too shabby an outing for Malaysia as they picked up Php 3 Million (~INR 40 Lakhs) for their second place finish.

Besides Malaysia and India, Team Thailand outlasted eight other teams in the Philippines, Singapore, Australia, Norway, Brazil, USA and Chinese Taipei on their way to the title. Congratulations to them for their terrific effort and come back to GutshotMagazine.com for more updates from the ongoing PPWC Main Event, the third starting flight of which is underway at the moment.

Image courtesy: So Much Poker