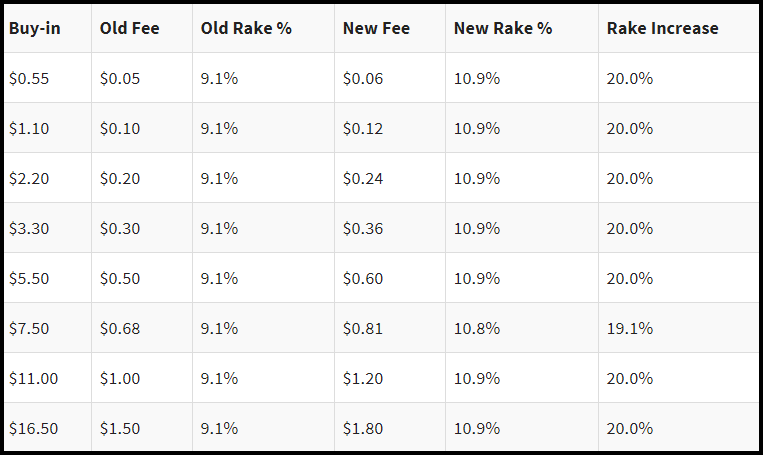 
“The online gaming business is changing rapidly including on the regulatory front, where we see a generally positive path towards industry regulation countered by bumps along the way. As the industry evolves, we need maximum flexibility and agility to adjust to changing conditions.”

The above is what PokerStars revealed to the public in their pricing update blog last week. The blog stated an increase in rake for MTTs with buy-ins lower than $20, while it also stated a decrease in rake for ‘Time Tourneys’, regardless of the buy-in amount. Tournament fees will continue to be publicly displayed on the PokerStars client.

For example, PokerStars previously took ten cents from a $1.10 tournament buy-in, but they will now take twelve cents. Basically, while the player will still be paying the same to enter the $1.10 tournament, it’s the prizepool that will be affected. ie. two cents less go towards the prizepool.

Here’s what PokerStars-sponsored pro Daniel Negreanu said when asked about the rake increase on Twitter:

The percentage of rake taken by PokerStars earlier was 9.1%, and that has been increased by 1.8%, to 10.9%. Have a look at this table for a better understanding of the PokerStars rake changes: 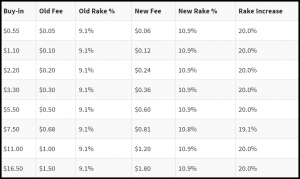 What this means is that PokerStars is now no longer one of the cheapest websites to be playing online poker games on, and they’ve also become the first company to move into double-digit rake charges. However, two years ago, PokerStars announced another rake increase on a variety of games, and they’ve still managed to remain a market leader. Your take on this?

For similar poker news from around the world, keep reading GutshotMagazine.com!