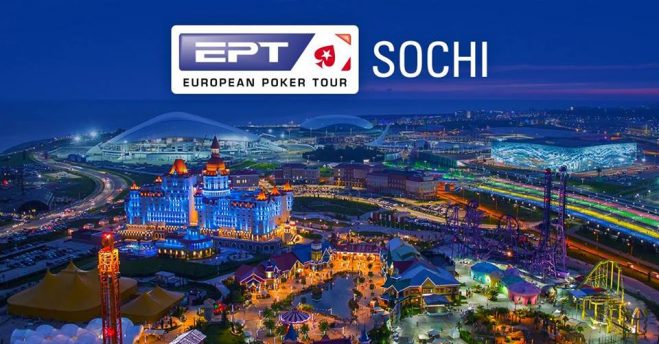 
PokerStars, one of the biggest brands in the poker world, owns and controls the European Poker Tour (EPT) since 2011. They just announced its EPT 2019 series to kick off in Sochi, Russia. The series will be conducted between Mar. 20-29 at the Casino Sochi for the fifth time in two years. The latest EPT Open series was also held in Sochi on Sept. 21-29 of this year.

Ever since the Russian government created a special gambling zone in Sochi back in 2014, just before the Winter Olympics, this Russian city has witnessed numerous large-scale live poker tournaments.

The EPT 2019 will be the tour’s fifteenth edition since its inaugural series back in 2004. The series’ full schedule is yet to be made public, but PokerStars has announced that more than 20 events will take place in its 10-day tour.

“I’m looking forward to seeing the EPT return to Sochi in 2019,” the PokerStars Ambassador Mikhail Shalamov commented. “It’s such an exciting and popular event. The fact this is the fifth time that PokerStars Live has visited the region in two years proves that! I’m excited to see what PokerStars have in store for the event next year,” Shalamov added.

Casino Sochi executives also weighed in on the Sochi gambling scene, saying that they had planned to continue sponsoring live events at the resort, and said that it had “managed to get to an understanding with the local regulator and the local authorities” to run online qualifiers to the live events.

Buy-ins for other events range from RUB 6,600 to RUB 375,000. Online satellites with buy-ins as low as 22 cents are also being run in the PokerStars client to give players more chance to qualify for EPT 2019, Sochi. In addition to poker, PokerStars will also be running a variety of sports activities such as night-skiing and snowboarding. Cash Games are going to be run 24/7 at the venue. For details on travel, accommodation and visa information, visit the PokerStars EPT Sochi website.

NOTE: Only players with registered PokerStars client account will be able to participate in the series.