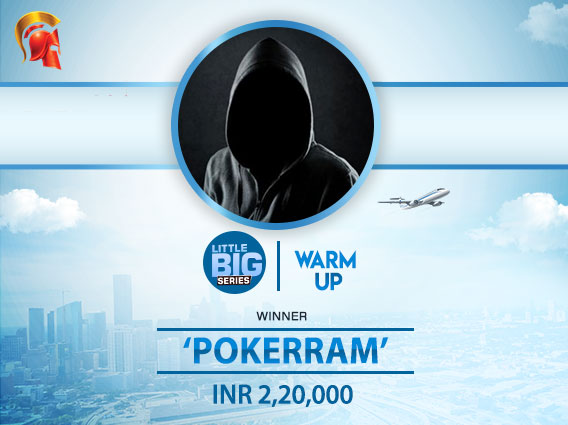 ‘pokerram’ claims win in LBS Warm Up at Spartan


The ongoing Little Big Series (LBS) at The Spartan Poker has attracted players from across the country to test their skills in this value filled series which offers prizepools in excess of 81 Lakhs over the course of its 4 days schedule. Last night saw one of the featured events of the series take place in the LBS Warm Up which was won by ‘pokerram’ at the end of a seven hour long grind.

It was a terrific prizepool for the players as 10 Lakhs was the guarantee up for this tournament and 200 entries ensured that the guarantee was met in this event which had a buy-in of INR 5,500. A couple of things to note across this LBS series is that all tournaments are a re-entry format however it is capped to only 2 re-entries per player. So despite having the buffer to come back in, the cap ensures that players must take that decision judiciously. 27 of the top finishers got paid out and the min-cash was just about double the buy-in. One player who has been putting in some consistent performances off late has been Rajat ‘Garammasala’ Sharma. Here too the Gurgaon-based player ran deep but just missed out on making the final table finishing in 10th place for a payday of INR 20,000.

From 200, it became 2 by the early hours of Sunday morning and pokerram went into heads-up against ‘showstopper89’. The latter had a 3:1 deficit against pokerram but he put up a good fight to try and turn the tables. He almost managed to get his stack to even with his opponent. However within a few hands things went back to square one with both players hitting a set but pokerram’s better kicker helped him take down a massive pot and reinstate the chip lead to him. In the final hand of the tournament all the chips went in on the flop with showstopper89 (8s 9s) losing to pokerram’s (Qc 8c) Queen high flush on a board of Tc 6h 4c Qh 3c. For the win, pokerram took home a sweet sum of INR 2,20,000 while runner-up showstopper89 received INR 1,49,000 for his efforts.

That was it for action from the penultimate day of this Little Big Series. Tomorrow will see the biggest tournaments of the LBS on schedule including the 20 Lakhs guaranteed LBS Main Event. Stay tuned to GutshotMagazine.com as we bring you all those updates tomorrow!