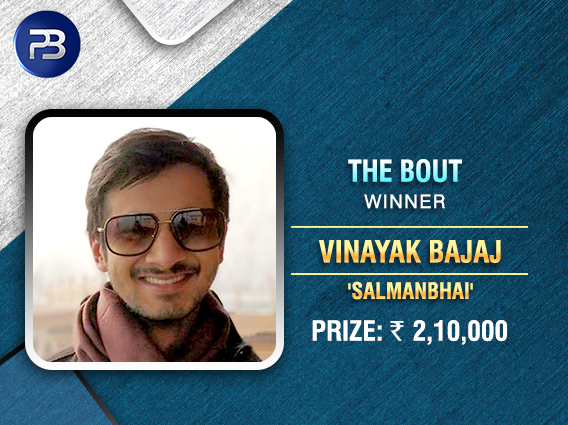 
The last one week has been a very good one in online poker for Vinayak Bajaj. It was just a few days ago that the player won The Vegas on PokerBaazi, where he plays under the screen name ‘salmanbhai’. He took home a prize of INR 2+ lakh but was not satisfied with just that. He wanted more.

His determination to get more led the player to another featured tournament victory on PokerBaazi a couple of nights back, where he shipped their Monday night tournament called The Bout INR 10 lakh GTD. This tournament is played at 8pm to mark the start of every week and salmanbhai was declared winner of the most recent edition of The Bout.

Apart from victories on other websites too, Bajaj has been making considerable bankroll additions on PokerBaazi, winning two featured tournaments in the span of less than a week. He beat a field of 250 entries (including 104 re-entries) to win the top prize of INR 2,10,000.

Monday night was also the final day of the 2018 WPT India series, so it was a good chance for lesser known players to make big cashes, as most of the pros were busy in Goa. Thus, there were very few known players among the 23 places that were eventually paid out a minimum prize of INR 15,000.

Paying INR 4,400 to enter this tournament, Bajaj ended up with a huge return on investment, and this probably wouldn’t have even been the toughest tournament he has ever had to play. Ending at 2:12am this morning, the grind was slightly longer than 6 hours, ending when Bajaj defeated ‘janak18’ in heads-up, with the latter taking away INR 1,55,000 for finishing second.

Rounding up the 6-figure cashes in this tournament was Arsh Grover aka ‘Button_Hai_Bro’, who cashed in 3rd place for INR 1,17,500. Grover has also been having a good run in online poker at the moment, recently having won not one, but two consecutive Sunday Stacks tournaments on 9stacks, winning prizes of INR 2.5+ lakh on both occasions.