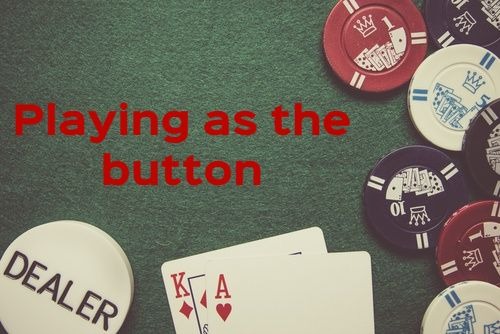 Playing as the Button


When it comes to poker, everyone bets at the position. If you are the first one to play, then it’s recommended to bet with a strong hand as you aren’t sure about other player’s holdings. On the other hand, if you are playing at button position which is the last position before the blinds, you already have a lot of information to play with.

A person dealing the hand is accredited with “the dealer button” or “Button”. Nowadays people seldom play poker at home, the casinos have house dealers and there is no need to deal online as the button there is only an indicator of the position.

The dealer can be seen raising a lot of money, especially if all the players before him have already folded their hands. This puts him/her in a position of power as now they can only force folds from small and big blinds and they already have loads of money committed to the pot.

Adapting is the real game in poker. There are two different kinds of players: loose and tight. It’s advisable to raise less against a loose player, the reason being their aggressiveness. A tight player can always be exploited since they show some resistance. It is trivial and although their preflop play might change it takes a pro to adjust their ranges both on the flop as well as post-flop. You should take a break from raising any more if a person is highly resistant. There is no point making the situation more confusing once you know that these players are fundamentally exploitable and you can make money without showing your hand.

The Button Vs The Fish

Fish is an inexperienced player, plays a large number of hands and prone to lose the pot often. It’s not easier to play against a fish but it is a “high-risk high reward” strategy. When you spot a fish, raise more. Having the button is an advantage in playing against a fish. You can see how the fish reacts to flops, turn and river giving you an idea of how to play your hand.

Concluding this blog, it is advisable to follow the tips as mentioned earlier in a small game. If you are playing a bigger pot, then as it is already said adapting is the name of the game. Adapt these rules according to your opponents and situations.