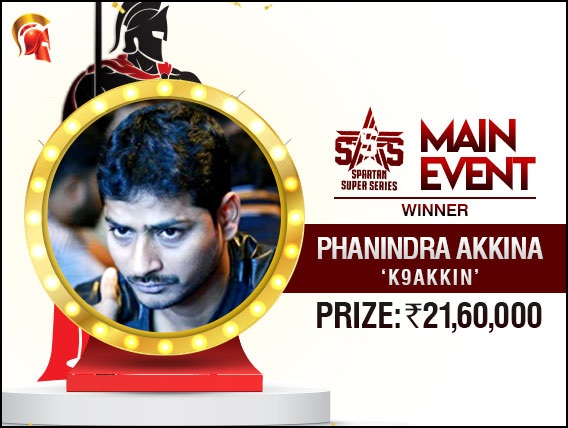 
The week-long Spartan Super Series (SSS) has finally come to an end. The series saw some great tournaments with outrageous guarantees and the best was saved for last. Yesterday was the final day of the tournament and the biggest tournaments were scheduled for this day, including the prestigious SSS Main Event.

All the top pros around the country would’ve tuned in to The Spartan Poker to be a part of the action last night, fighting it out for the top prizes and also hoping to end on top of the SSS Leaderboard, where a total of INR 10 lakh in prizes was up for grabs. The biggest highlight of the series was scheduled for yesterday – SSS #35 Main Event INR 75 Lakh GTD.

The re-entry tournament had a buy-in of INR 11,000 and the guarantee was smashed, with a massive new prize pool of INR 86.4 lakh being generated. 6pm last evening is when it kicked off and it was 27 minutes short of 6am today morning when the tournament came to an end. Phanindra Akkina aka ‘k9akkin’ was crowned champion of this tournament, for which he walked away with a life-changing prize of INR 21.6 lakh.

Akkina has been a regular player on Spartan, and he seems to like taking down the biggest tournaments. A couple of months back, he won a Destiny tournament for INR 5+ lakh and also won a Millionaire title last year for INR 20 lakh. Last night, he deserved another huge prize after he beat 864 entries to be the last man standing.

The top 70 players were paid out a minimum of INR 30,240 and Akkina walked away with the biggest prize of the series, after beating ‘Exhaust’ in heads-up of the Main Event. Even though this player would feel a little disappointed that he missed out on the massive pay-jump for first place, he still received a handsome pay-out of INR 12,96,000. In the final hand, Akkina’s Queens and Threes beat his opponent’s pair of Queens.

Gutshot caught up with Akkina after this huge victory to ask him how it feels. He said, “I’m feeling extremely happy to win yet another signature tourney on The Spartan Poker. It was a slow and steady ride till the end; nothing as such to remember about any particular hand.”

When asked about what he wishes to do with this mega prize money, Akkina said he was still uncertain, saying, “I’ll plan after the money hits my bank account. On a parting note, Akkina told us about his plans in the poker circuit, saying, “I’m going to continue to grind online and play a few domestic live events as of now.”

Abhinav Iyer aka ‘Schumi91’ finished 9th in the Main Event to become the first person to hit the 6-figure pay-outs, while Sumit Sapra aka ‘mrgr33n’ also cashed out in 12th place. Sapra has been brilliant throughout the series, which allowed him to top the SSS Leaderboard for the top prize of INR 4 lakh. We’ll continue to bring you top poker stories from around the country, so keep reading GutshotMagazine.com for more updates. 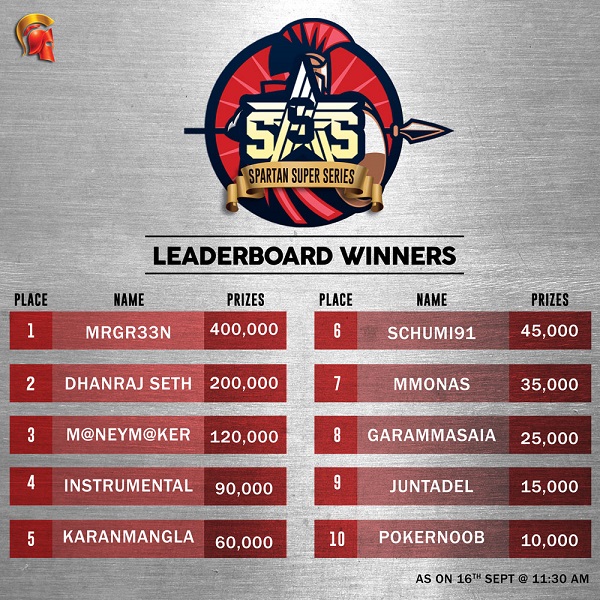