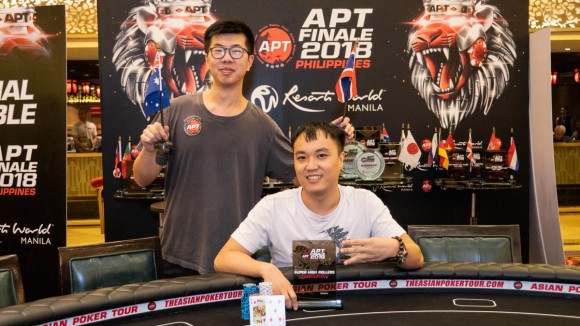 
Asian Poker Tour (APT) has taken its final stop for 2018 in the Filipino city of Manila on Nov 27. The series, dubbed as the ‘APT Finale Philippines 2018’, just saw its highest buy-in 2-day event of PHP 500,000 (~INR 6.72 Lakhs) Super High Rollers wrap up in a single day. How does a tourney like this end in one single day? You may ask. Did the tournament witness exceptionally high-level gameplay by some supreme poker player who eliminated dozens of opponents in one single Samurai slash? Well, read on.

The tournament had only three players signing up, Phachara Wongwichit, Soobum Kim, and Lester Edoc, each coughing up PHP 500K to create a prize-pool of PHP 1,453,700 (~INR 19.55 Lakhs). At least there were three people in the whole world enthusiastic about playing this event.

A few hands into the game, two-time APT Main Event Champion Lester Edoc had already started accumulating a massive stack against his two opponents and was aiming straight at the title. The lesser known of the three, Soobum Kim, tried to comeback by winning three hands and doubling up in all of them. However, on his fourth, Edoc obliterated him with pocket Eights over his pocket Threes. Kim was eliminated and the heads-up between Edoc and Wongwichit came into play.

Phachara Wongwichit surprised everyone with his victory, because his opponent had a massive chip lead of 5:1 going into heads-up. Wongwichit rose from the ashes like a Phoenix to play some phenomenal poker. He quickly doubled up twice, once by calling Edoc’s bluff and second by his AAA66 full-house, coming on par with Edoc’s stack. A deal was struck between the two, giving 2nd place money back of PHP 500,000, and the game continued. Wongwichit again won a hand, making a flush over Edoc’s 39s bluff. 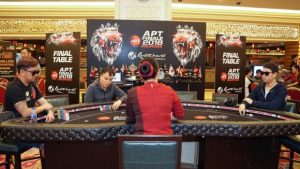 Both Edoc and Wongwichit are established players in Asia as well as rest of the world. Wongwichit, the champion, hails from Thailand, where he is currently ranked 3rd in the country’s All Time Money List. He started playing live since 2011, but beginning this year, he upped his play to another level. He has won two 6-figure prizes in this year itself. He also made an appearance in India, at the Baadshah Gaming Live tournament held in Goa in April of this year, the only foreigner to cash out in the Warm-Up event, taking home INR 79,925.

Along with the Super High Rollers, the APT Finale Opening Event was also simultaneously in play. The Final Table of 8 of the Opening Event will be competing against each other today for the title.