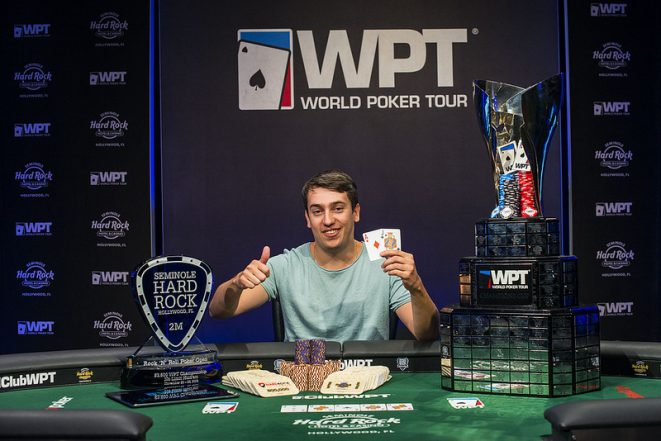 
The World Poker Tour (WPT) just concluded its Rock ‘N Roll Poker Open (RRPO) at the world-famous Seminole Hard Rock situated in Florida. The series had a ton of exciting action-packed events, with a wide buy-in range ($360 – $3,500), catering to all kinds of players. David Peters did a back-to-back, winning a title in the series, having previously won the same title at Seminole exactly 364 days earlier.

The Championship event saw 5 days of high-stakes poker gameplay, including two starting flights. The Final Table of 6 was held on the last day of the RRPO, Nov 28 and was also live-streamed on Twitch. Moldova-born Pavel Plesuv was crowned as the champion, walking away with $504,820 (~INR 3.52 Crores) as 1st place prize money.

Plesuv, a Czech resident, had also shipped the Mid-States Poker Tour (MSPT) Big Blind Ante event held at The Venetian in June this year for $640,062 (~INR 4.46 Crores). The guy went wire-to-wire in the Final Table, which was a bit of a redemption moment, since in Season XIV, he came close to winning the title, but had to settle for runners-up prize of EUR 120,000, where he was wire-to-wire till the end too. His best live cash though, was at the partypoker MILLIONS in February this year, where he finished 2nd and took home $924,841 in cash. It just goes to show how skilful he is at cashing out big in high-stakes poker.

“I was heads-up in WPT Prague three years ago with a big chip lead,” Plesuv said. “I lost. So, I’m really excited to come back and win.”

The final hand was against Jim Gilbert. Plesuv opened the heads-up with an overwhelming 8:1 chip lead and Gilbert didn’t have much room for a comeback.  Plesuv shoved his stack of 9 million with Ad Js. Gilbert called off with 9h 9d. Plesuv caught an Ace-pair in the flop, enough to beat Gilbert’s pocket Nines, earning his place at the WPT Champions Club. Gilbert finished runner-up with $326,565.

“This is the best year so far,” Plesuv reacted after his win. “It started with a win in February and I’m finishing the year with a win here, and maybe I’ll win something in December. We’ll see, but this is awesome. I’ve been running pretty good.”