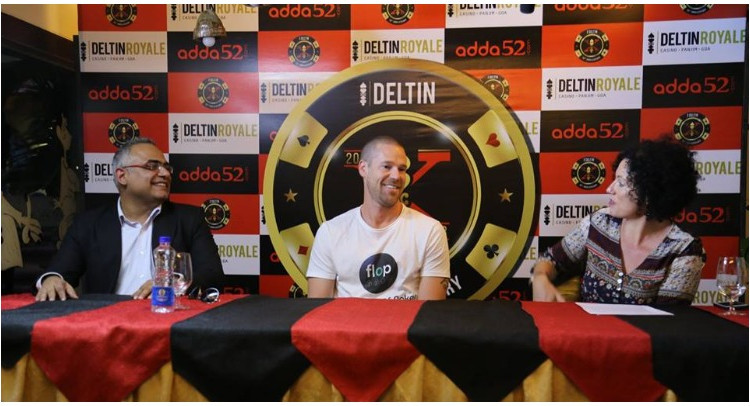 
The entire poker industry was excited about the news of Finnish poker pro Patrik Antonius coming to India. A couple of weeks back, he posted on social media about his first ever trip to India, being invited by the Deltin Group to be a part of their 10-year anniversary celebrations on board the Deltin Royale in Goa.

The luxurious floating casino has been home to some of India’s biggest and best poker tournaments over the years, including the record-breaking recent WPT India series in November. However, this recent move turned out to be one of the biggest ones for the game in India, which is slowly but steadily gaining acceptance and popularity across the country.

The skill game has been likened to ‘gambling’ for far too many years now, but these kind of moves help spread awareness about the game. The Finnish high-stakes pro Antonius, referred to as ‘PA’, ‘The Finn’ and ‘Black Lotus’, is also a former professional tennis player. He was a part of the extravagant celebrations in Goa, which lasted between 30 November and 2 December 2018.

Apart from gaming events on the casino, there were plenty of Bollywood performances to go with Antonius also playing a few cash games in Deltin. Adda52 had even given players the chance to play with Antonius on the same table, and the person who did brilliantly to win this opportunity was Pune-based Siddarth Singhvi, who plays under the name ‘badtameez_donk’ on Adda52.

From 22 November, Singhvi had to participate in the Max Hands Play Contest on Adda52, then landing a spot to play in an SnG which would guarantee an INR 5 lakh seat to play with Antonius. Singhvi shipped the SnG too, beating 7 others and flying down to Goa to trade some chips with the poker legend who ranks #1 on the Finnish all-time poker list, with nearly $12 million in live earnings.

To join Antonius and Singhvi on this ‘never-seen-before’ cash table in Goa, Delta Corp (India’s only listed poker company) invited some of the country’s top high stakes players to play poker on 2nd December. While Singhvi decided to take the money and grind elsewhere in the casino, Antonius was spotted playing PLO cash games with the likes of Jagdeep Singh and Anil Gulati.

When spoken to about this experience and the current poker scene in India, Antonius said, “Poker in India is growing and it has been nice to see how much people are enjoying playing here. I am looking forward to being a part of big events in India in the future. Adda52 and Deltin Royale have done a great job in Goa to get India proper recognition in poker.”

Some of the many celebrities invited to the Deltin Royale for these festivities over the 3-day event were Brazilian actress/model Bruna Abdullah, model Shazahn Padamsee as well as well-known singers like Shraddha Pandit, Neeti Mohan, Pinky Maidasani and Shilipi Paul.

One of the men behind making these celebrations happen was none other than Manish Adnani (pictured with Antonius below in Adnani’s Instagram post), Business Head – Poker Delta Corp Ltd. Talking about these 10th anniversary celebrations, he said, “I am very humbled to celebrate this moment with Delta Corp. I remember playing the first game hosted by Casino Royale back in 2008, and since then poker has aggressively been promoted by Delta Corp and is growing at a fast pace in the sub-continent.” 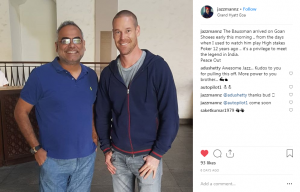 India is the world’s 7th largest economy and with our population being only behind that of China’s, we have potential of having the biggest gaming/gambling market in the world. Such functions organized by Adda52 and other market giants will help grow skill games like poker. The online poker market has already been booming over the last couple of years while the live scene is on a very slow rise, due to regulatory issues.

The mindset towards the game is slowly changing in India, and Adda52 plays a significant role in this change. Not too long ago, they recruited Universe Boss Chris Gayle as their brand ambassador, who is a worldwide cricketing phenomenon. On the Indian front too, they have Bollywood actress Minissha Lamba as their celebrity pro.

Very recently, we also had Spartan’s second edition of the IPC Awards held in Mumbai, where the country’s top poker players were called on stage and felicitated with trophies. All these moves help greatly in promoting the sport of poker in India, and we look forward to many more such events where Indian players are recognized and top international poker players come to India.

For similar updates on the biggest happenings in the Indian poker industry, keep reading GutshotMagazine.com.