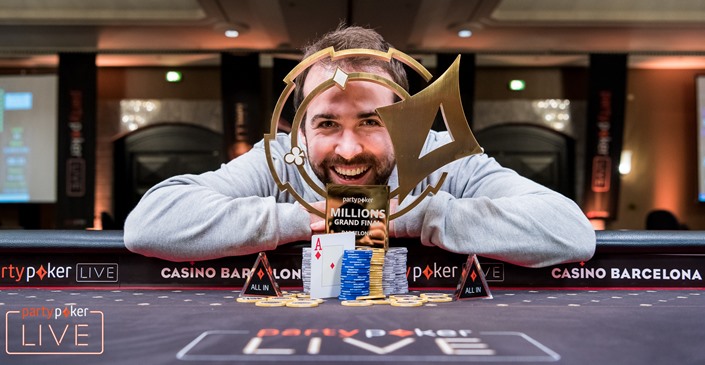 
Nine years after first cashing out in a live poker tournament, Pascal Lefrancois has scored a 7-digit win for the first time ever, after shipping the partypoker Live MILLIONS Grand Final Main Event in Barcelona. The Canadian poker pro outlasted a mammoth field of 1,175 entries to take away top honours at the Casino Barcelona!

Lefrancois had once cashed out for $635,011, for finishing 11th in the 2010 WSOP Main Event, and almost 8 years later, he has beat his career-best live cash, pocketing €1,700,000 for first place. This amount wasn’t just his career-best live cash, but it was also the biggest prize ever awarded in a poker tournament at Casino Barcelona. A total of 143 places were paid out, with a minimum cash of €25,000.

The Main Event began on 11th April and ended on 15th April, with the huge field taking a €10 million guaranteed prize pool up to €11,397,500. He may have ended Day 2 as chip leader and even entered the final table as chip leader, but you know it wouldn’t have been an easy task when you hear that names like Stephen Chidwick, Dominik Nitsche and Jan Schwippert were also a part of the FT.

Chidwick would’ve been one of the happiest players at the table, finishing 3rd for €1 million, shortly after he finished 2nd in the €100K Super High Roller a couple of days back, for his career-best score of €1.1 million. He won the US Poker Open earlier this year and has been on an extremely hot run over the last couple of months. It was also a career-best live cash for Adam Owen who finished in 2nd place, for €1,300,000.

When Lefrancois reached heads up against Owen, the former had a commanding lead. Eventually, both had aces, Owen went all-in with his A-10, while Lefrancois called with A-J and won due to higher kicker. With that, he took away the massive prize for first place, and Season 1 of the partypoker Live MILLIONS came to an end.

Season 2 of the partypoker Live MILLIONS will begin this month itself, kicking off in Montreal, where Lefrancois will be looking to score big on home soil as well. Keep reading GutshotMagazine.com for all major partypoker tournament updates!