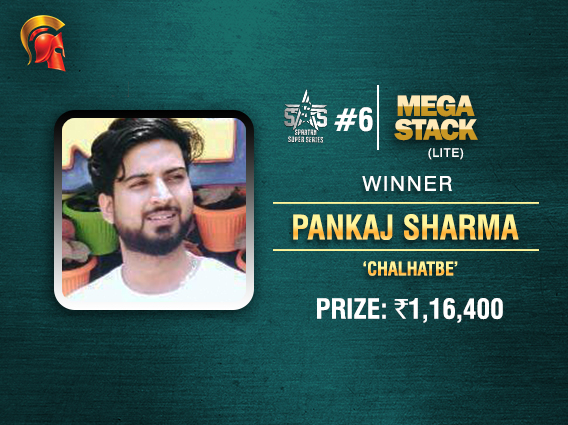 
The Spartan Super Series (SSS) is one of the biggest online poker series in India and yet another edition is going on at the moment, with 37 tournaments scheduled between 8-14 October. After an exciting Day 1, the second day began with SSS Event #6 Mega Stack (Lite) INR 6 Lakh GTD.

This INR 1,000 re-entry tournament began at 2pm last afternoon and a massive field of 625 entries registered to the event, with the top 55 players eventually getting paid out a minimum cash prize of INR 2,940. However, the players wouldn’t have had their eyes on that min-cash, but on the top prize for the champion!

That champion turned out to be Pankaj Sharma aka ‘chalhatbe’ who had to go through a tough field to reach the top but was handsomely rewarded once he did so. Sharma took away INR 1,16,400 for shipping the tournament while ‘Jackaal’ won INR 73,800 for finishing second.

It was Level #63 of the tournament when a winner was declared, with the blinds running at 48,000/96,000 – 9,600 and Sharma holding a small chip lead over Jackaal. The winning hand was a brilliant one for Sharma, but not such a good one for Jackaal, who had to lose with pocket Kings.

This hand saw Sharma holding 9h 5h, and he didn’t hesitate to make the pre-flop call of 144k. Jackaal betted another 201k on the 2h 9c 3h flop. Sharma re-raised to 624k and Jackaal went all-in, only for Sharma to make the call with 9-pair. After flipping the cards, Jackaal was ahead but not for too long as the turn and river opened 5d and 6s, and Sharma won with two pairs – Nines and Fives.

This marked a fantastic start to the day and we’ll bring to you updates from all the other SSS Day 2 tournaments2, so keep watching GutshotMagazine.com.