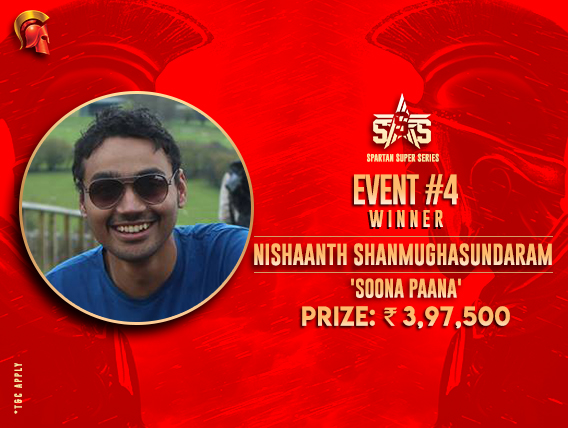 
It’s December and it’s truly the best time of the year. For poker players too, it’s a fantastic time to be grinding online, as The Spartan Poker is currently hosting their Spartan Super Series (SSS), while the PPL Winter Edition is also taking place on PokerBaazi, where Day 3 just ended last night.

Talking about the SSS, Spartan has promised INR 3+ crore in guaranteed prizes through the series and yesterday was Day 1, where 5 tournaments were played out and new winners emerged. From them, ‘Screwdriver45’ would be the happiest, given the fact that he won not one, but two titles. Other winners also include Nishaanth Shanmughasundaram, ‘BIGBANG5759’ and ‘Balleballe’.

Here’s a look at what happened on SSS Day 1:

With a buy-in of INR 330, the series began on a lower note, giving many of the mid and low stakes players a chance to win big an increase their bankroll to participate in other bigger tournaments through the series. 129 players participated in this tournament and from them, only the top 18 were paid out with a min-cash of INR 2,400. Eventually, it was ‘BIGBANG5759’ who shipped the tourney, bagging the top prize of INR 38,625 after he beat ‘^iOOi^’ in heads-up, both players who have had past wins on Spartan. In the final hand, BIGBANG5759 went all-in pre-flop with Qh Ad and his opponent made the call with Qc 7c, only for the board to run dry 2c 2d 6s 4s Td. BIGBANG5759 won with a higher kicker, Ace.

This re-entry tournament saw a buy-in of INR 550 and 214 players decided to join the action. Eventually, the top 27 players from them finished in the money, each taking away INR 1,800 as a minimum cash prize. The tournament progressed, and the eventual champion turned out to be ‘Balleballe’ who won INR 44,000 for this effort. In the final hand, both players in heads-up hit a pair of Tens on the flop which prompted them to shove all-in. The board ran 6c Ts 8h 6h 4c and both players hit Tens and Sixes with Balleballe having the higher kicker, Jack. He beat Nadeem Basha aka ‘pokerbill’ in heads-up, who won INR 29,800.

With a buy-in of INR 880, 173 players joined the third tournament of the day where the guarantee was slightly beaten and eventually, the top 24 players shared prizes of a minimum of INR 2,296 each. Here’s where the player ‘Screwdriver45’ started asserting his dominance on this edition of the SSS, winning the tournament for a prize of INR 52,808. The player beat ‘Krazy8’ in heads-up, with the latter winning INR 35,473 for finishing second. From here, Screwdriver45 gained the confidence to play in the bigger tournaments scheduled for the night.

This was the first high-value and high buy-in tournament of the December SSS on The Spartan Poker, with a buy-in of INR 3,300, and a total of 475 players joining the action by the end of the registration period. Eventually, it was Spartan regular ‘Soona Paana’ who shipped the tournament and now we know the identity of this player – Nishaanth Shanmughasundaram. Here, he won a massive top prize of INR 3,97,500 for winning the tournament, beating Pulkit Goyal aka ‘Championplayer’ in heads-up, who won INR 2,47,500. Finishing in third place was another regular winner Rubin Labroo aka ‘Kornkid’ who took away INR 1.5 lakh.

Shanmughasundaram also did well on PokerBaazi a couple of nights back, shipping a PPL title as well. Gutshot caught up with the player to ask him about this win yesterday and he said, “It is pretty satisfying as some really, very good players were on the FT. I was 8/8 at one stage, but the structure was pretty deep, and it helped me bounce back. Heads-up was quite swingy as well, but I won a crucial flip to ship it.”

This was the one that all the top pros were waiting for. With a steep buy-in of INR 22,000, only the best took part in the PLO Highroller, which saw a total field of 78 players participating, which was good enough to beat the advertised guarantee. From here, only 7 players were paid and all of them ended with a minimum of a small 6-figure score.

The first to cash was Sumit Sapra aka ‘mrgr33n’ who finished 7th while Rajesh Tallapaneni was the next to bust in 6th place. He was soon followed by Pulkit Goyal aka ‘Championplayer (5th – INR 1.4 lakh), while Jayjit Ray aka ‘David Blaine’ cashed in 4th for INR 1.87 lakh after firing three bullets to get here. The winner of course was ‘Screwdriver45’ who added a massive sum of INR 4,68,000 to his bankroll for shipping the tournament. This was his second win of the night when the tournament came to an end at 2:36am this morning, which also helped him top the SSS Leaderboard at the end of SSS Day 1. Talking about the victory, he said, “I am really excited to have shipped the SSS PLO HR. TheSpartanPoker.com is an amazing site for tournaments as well as cash games. Hoping to continue playing and winning on Spartan.” 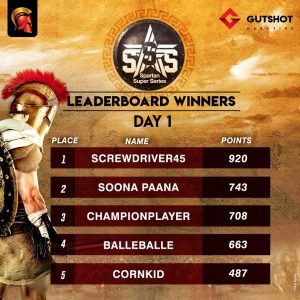