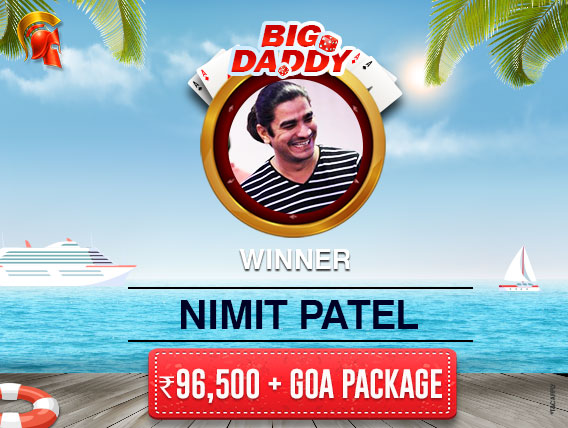 
Featured tournaments on The Spartan Poker are always extremely popular among online players in India, and the Big Daddy tournament is very high on that list of their most popular tournaments. Players love this tournament as it has an INR 5 lakh GTD prize pool with a buy-in of just INR 550 and what’s better is that the winner gets a free package trip to Goa, to go with his/her tournament winnings.

A total of 885 entries registered to yesterday’s Big Daddy tournament, which kicked off at 4pm IST, just before the mega Millionaire tournament started. The tournament went on for 5 hours and 54 minutes before a winner was declared in Nimit Patel who plays under the name ‘Agarwal007’.

The prize pool allowed the top 71 players to be paid out a minimum cash prize of INR 1,900 and Patel took home the largest share of the prize pool – INR 96,500. Along with this, he has won a free package trip worth INR 30,000, to play poker at the Big Daddy Casino in Goa. Ironically, Patel is a resident of Goa, so he won’t be needing to make a very long trip to reach the Big Daddy Casino!

In this hand, Patel shoved all his chips into the pot pre-flop with 3d Ac and d00mtr00p3r made the call with 5h Ah. The board opened Jd Ad 4d 8d Qc which meant that the latter was ahead on the flop, but four consecutive Diamonds meant that Patel completed an Ace-high flush and took down the title.

For more updates on the best poker tournaments in India, both online and live, keep reading GutshotMagazine.com.