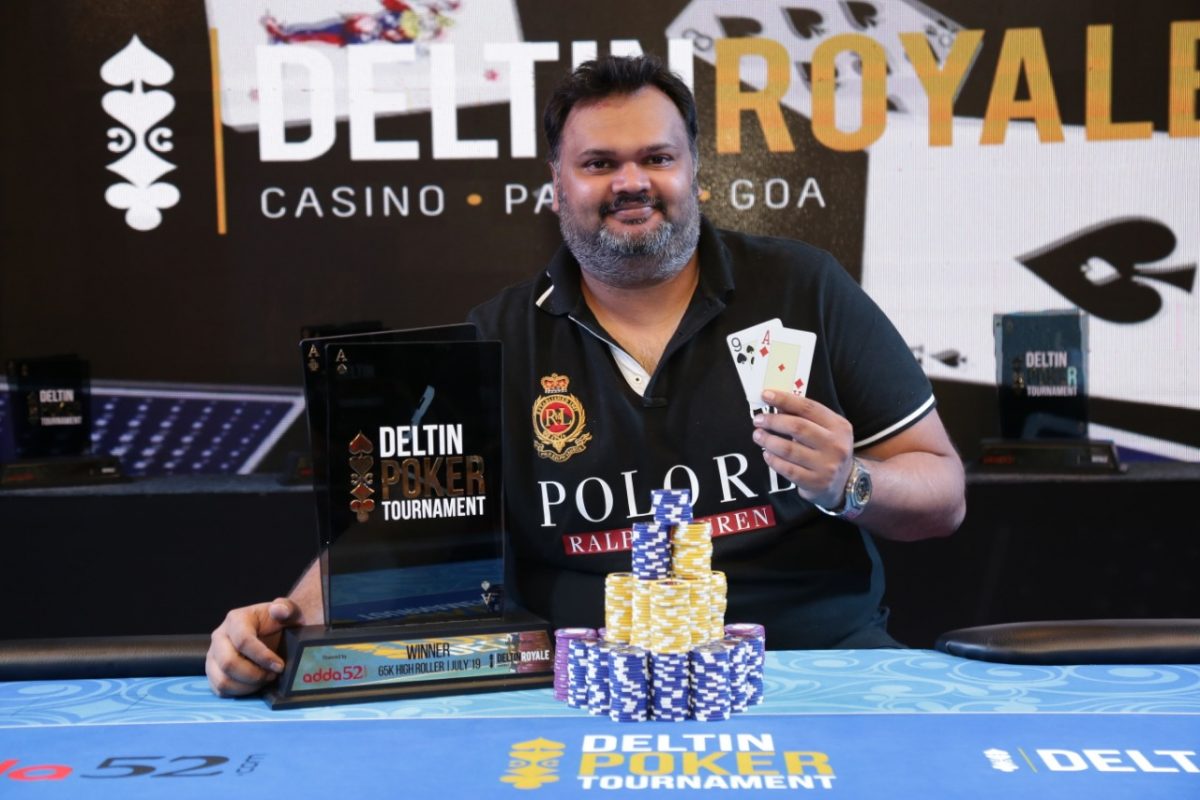 
He loves to be part of big buy-in tournaments and taking them down! Now Mumbai’s Nikunj Jhunjhunwala adds yet another feather to his highroller collection by winning the INR 100k Highroller event at the ongoing Deltin Poker Tournament (DPT) series for a massive first prize of INR 27.5 Lakhs. Jhunjhunwala defeated another well-established pro in Ashish Ahuja to lay claim to the Highroller event which took place onboard Casino Deltin Royale in the Goan capital of Panjim.

A known high-stakes cash game professional, Jhunjhunwala has certainly proved that he is no slouch at winning tournaments and big ones too at that. And the Deltin Royale is without doubt his favourite hunting groud as all this tournament titles have been won at this venue. His most well known earlier titles were in fact a back-to-back whammy at the India Poker Championship’s December 2015 edition where he scored a win the IPC 100k Highroller and then a couple of nights later, won the IPC 50k Main Event as well. He then followed this up by winning the 2018 World Poker Tour India edition’s Main Event for a princely sum of ~INR 66 Lakhs. And if there ever was a shadow of a doubt of this player’s propensity to perform on the big stage, he dispelled that with a win in this DPT Highroller.

A field of 146 entries comprised the Highroller and 61 players survived the first day of this event to move into Day 2. With only 14 players going to make it to the money, there was understandable trepidation as they approached the bubble. Adda52.com’s celebrity ambassador and Bollywood actress Minissha Lamba ending up being the unfortunate bubble girl finishing her run moneyless in 15th place, her end coming courtesy of Anil Adiani. Adiani however was not able to consolidate and he too fell just shy of the final table of seven, busting out in 9th place. Rishabh Vekaria’s 8th place elimination signalled the start of the final table which was led by young Shawn Chatterton of Kolkata holding a stack of 1.57 million chips.


It was a classic elimination, in fact, on the very first hand of the FT, where the chip leader Chatterton knocked out Prashob to take the remaining players to the next pay jump. He did not let that deter him and he managed to double up over the next couple of levels and made a big bust of Goonjan Mall when his set of Tens knocked out Mall’s Ah Qh. That took out another player and got Jhunjhunwala to a stack of 2.7 million. At the other end, his eventual HU opponent was also playing good poker to get his stack up first by knocking out former FT chipleader Shawn Chatterton and then Ronak Vyas in 3rd place to set up the headsup match.

Not much to choose from both players with Ahuja holding a 3 million stack and his opponent with about 2.6 million. While both players are pretty skilled and had a fair idea about each other’s play, there wasn’t much play to be had shortly into headsup when a bad beat turned the tables in Jhunjhunwala’s (Ah 9h) favour. Both players held the same cards of Ace Nine but the board of 5c Td 2h Jh 3h gave the Mumbai player a flush and an overwhelming chip lead. Jhunjhunwala held a 5:1 lead and unfortunately for him, Ahuja could not get any traction going. It would end up being Ace Nine again which would spell the close of this tournament as the river card on a board of 7h 5c Js 3s Ah would trump over Ahuja’s shove with Kc 5h.

Jhunjhunwala was crowned the winner of this DPT Highroller event and you can stay tuned to GutshotMagazine.com for updates from the ongoing DPT Main Event.