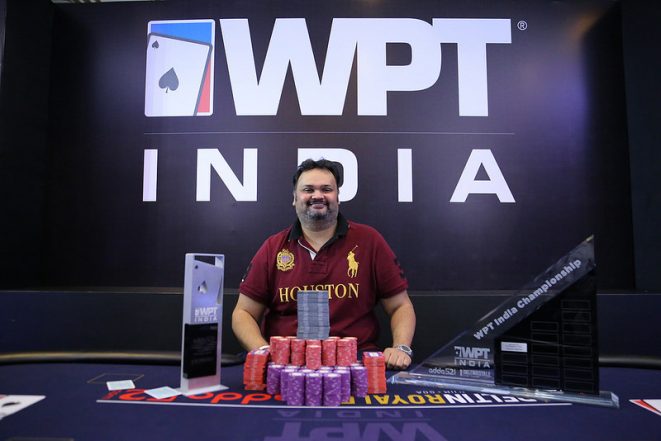 
This was the moment we were all waiting for. The crowning of the new WPT India Main Event Champion. After a wait of 12 months, the World Poker Tour (WPT) gave Indian players something to cheer about by launching the second edition of the WPT India series. Plenty of side events were scheduled but none were more important than the INR 55k Main Event.

Today was the last day of this series and it will end in style. Exactly one year after Vikash Mantri won the inaugural WPT India Main Event, we have a new champion. A record-breaking field was witnessed after 697 entries registered to play, and eventually, it was Nikunj Jhunjhunwala who became the winner of the biggest WPT India Main Event. He won the life-changing first-place prize of INR 66.35 lakh! This became his largest live cash and another feather in his cap, having also won the IPC Main Event and Highroller back in December 2015.

We reported the news of Deepak Singh leading the Final Table of the Main Event, going into the final day with a massive stack of 4.6 million, while Harsh Dembla was the shortest stack with just around 4 BBs left. Dembla doubled up against Singh early on, but it wasn’t too long before he was shown the exit door, busting in 9th place for INR 6,63,000. It was Singh itself who busted Dembla, winning with a higher kicker on a 10c 7s 4c 2d 7d board.

Singh reinstated himself as the chip leader going past 5 million, and very soon, we had another major elimination. This time, it was Kanishk Upreti who bowed out of the tournament after he moved all-in from the button with As Jh. He got a call from Sahil Mahboobani who revealed Ah Ks. The board opened 7c 5c 2d Kc 10d to give Mahboobani a King-pair and Upreti hit the rail in 8th place for a handsome pay-day of INR 8,84,000.

The tournament only got more intense from here on, and with the rising blind levels, the pressure on the players was also rising. By Level 30, the blinds had reached 50,000-100,000 with a big blind ante of 100,000 as well. In this level, another knockout took place in the form of Adda52 Team Pro Amit Jain, who ended a beautiful run here at the Main Event in 7th place, taking home the first 7-figure cash prize of the night – INR 11,11,000.

He was sent to the rail by Nikunj Jhunjhunwala, with everyone stacking up considerably by this point. Jhunjhunwala called Jain’s all-in shove pre-flop, and it was Jhunjhunwala’s As Kh against Jain’s Ac 10c. The board ran dry with Qd Js 8h 6s 2h and Jain was ousted from the prestigious Main Event. 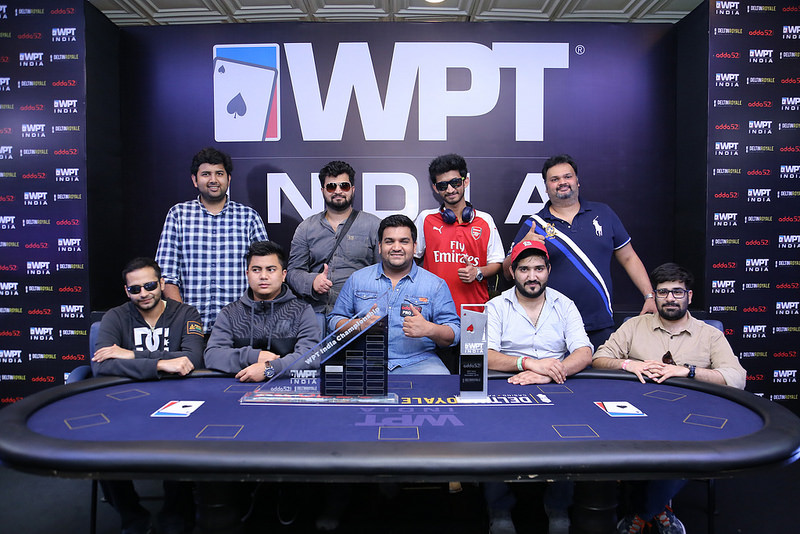 The pay jumps from here onwards were huge and Day 1B chip leader Akshay Nasa was the next one who found himself out of the tournament. Once again, it was Jhunjhunwala who executed the knockout, stacking up past 5 million in chips. In this hand, Nasa moved all-in from the hijack with Kh Jc and Jhunjhunwala had no hesitation in making the call with pocket Queens. The board ran As 7s 2h Qs Qc to complete Quads for Jhunjhunwala and put Nasa out in 6th place for a brilliant bankroll addition of INR 13,41,000.

Some more chip exchanges were seen between the final 5 players before the next shortest stacked player, Hidangmayum Somesh, was eliminated. Another big prize was given away on the Final Table as Somesh busted in 5th place for a prize of INR 16,83,000. He shoved with Ah Qc and Deepak Singh called with pocket Kings. The latter completed a full house with 7c 3c 3d 8s 3h opening on the board.

The action slowed down even further after this knockout and when the next elimination took place, it was the overnight chip leader Deepak Singh who had to go. He shoved with pocket Jacks against Jhunjhunwala who had Ac 5c. The board Qs 9c 2c 2h had Singh ahead until the Kc river card completed a flush for Jhunjhunwala (his third FT knockout) as Singh walked away in 4th place for a whopping INR 22,07,000.

The heads-up battle only began once another elimination took place, and this was in the form of Vidur Singhal. A very impressive run came to an end when he was busted by Sahil Mahboobani in 3rd place for a massive INR 30 lakh cash prize. Mahboobani’s Ah 10c beat Singhal’s K9o after he hit two more Aces on the board.

A few exchanges of the chip lead are customary when you go into a heads-up session almost neck to neck, and that’s exactly what happened in this prestigious 2018 WPT India Main Event. With the stakes so high, you can only imagine how much of pressure there would’ve been on these two players. Eventually however, the end arrived as Jhunjhunwala took advantage of a superior stack he had built by the end of the night.

Mahboobani shoved with 1.6 million chips and Kc 8s in hand. His opponent made the call with 5s 9s and as the board opened Qd 10d 5h 9d 8c, it was all cheer at the venue as Jhujhunwala completed Nines and Fives to take down the pot and the trophy. He is now WPT India’s biggest ever winner! Mahboobani on the other hand would feel distraught, having come so close but yet not being able to complete the victory. However, it was still an outstanding performance from him and he was awarded INR 46,53,000 for finishing second.