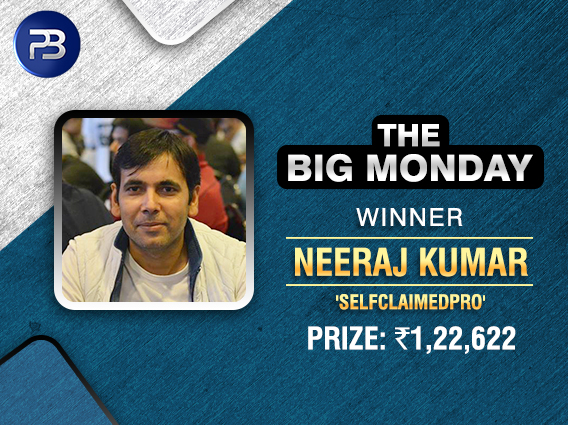 
If you are a regular player on PokerBaazi, we’re pretty sure that you would’ve come across the name ‘SelfClaimedPro’ on countless occasions, as this guy is usually among the top chip stacks, finishing in the money and also on several final tables. The tournament regular has won a few online poker tournaments to go with topping leaderboard competitions as well.

This player is Neeraj Kumar and yesterday, he made another good addition to his poker bankroll, by winning The Big Monday INR 5 Lakh GTD, which is one of PokerBaazi’s featured tournaments. He beat a number of known pros last night to emerge victorious and take home a prize of INR 1,22,622.

The Bangalore-based player beat Siddharth Pandey aka ‘Siddonuts’ in heads-up, with the latter having to settle for the runner-up prize of INR 92,592. Pandey is also a known player on PokerBaazi, his most recent victory coming when he shipped The Summit on the same platform for INR 3.15 lakh.

The tournament was wrapped up by 1:42am this morning, after a grind of nearly 6 hours. Before heads-up began, the final elimination was that of another well-known player called Ashish Ahuja aka ‘rocky3705’ who finished third for INR 67,567. This guy is also a regular winner across all platforms.

Gutshot caught up with Kumar after this victory to know how he feels. He said, “It always feels good to win a featured event on the first day of the week. PokerBaazi has done a great job on the new software and tournament schedule. The new tournament leaderboard is awesome. I hope to run good for the rest of the month and win a free trip to Australia.” Keep reading GutshotMagazine.com for more updates on the biggest poker tournaments in India.