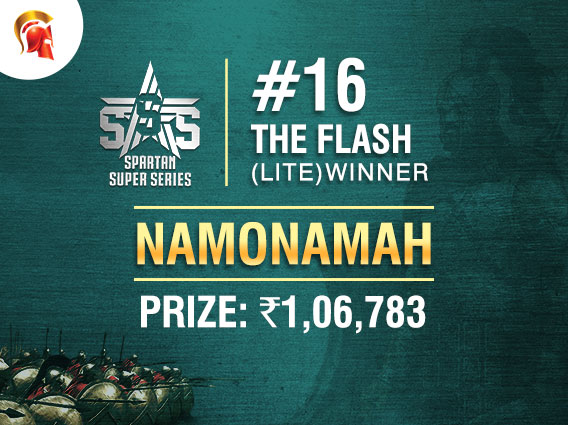 
The Spartan Super Series (SSS) continues at The Spartan Poker, one of India’s best online poker companies. A guaranteed amount of INR 3.7 crore is being given away in this edition of the SSS, which is scheduled between 13-19 August. Yesterday was Day 4 of the series, where huge prizes were given away.

The day began with SSS Event #16 The Flash (Lite) INR 3 Lakh GTD. The tournament had a buy-in of INR 1,500 and it kicked off at 2pm, with a healthy participation of 353 entries registering to the tournament. This led to the guarantee being crushed, as it has many times in the ongoing SSS, and a new prize pool of INR 4,85,375 being generated.

27 players eventually shared this prize pool with a minimum cash of INR 4,368, and the player who took home the biggest prize of all was ‘Namonamah’, outlasting this field and being awarded INR 1,06,783 for his efforts. ‘David Blaine’ finished in second place, for which he was awarded INR 72,321.

David Blaine then decided to go all-in pre-flop with pocket Threes, which Namonamah would’ve called without thinking too much, holding Ac Kd. Blaine would’ve been very happy with the flop opening Tc 4s 6d and him maintaining his lead with a pair of threes. However, Qc on the turn and Jc on the river completed a Ten to Ace straight for Namonamah, which led to him winning the pot and the first tournament of SSS Day 4 on Spartan.

David Blaine however, won’t be too disappointed as he has been a consistent player of late, having finished runners-up in The Flash last week for a prize of nearly two lakh rupees. He has also made a few deep runs in the SSS, finishing Day 4 at #4 on the SSS Leaderboard, where a total of INR 10 lakh is being given away in guaranteed prizes.