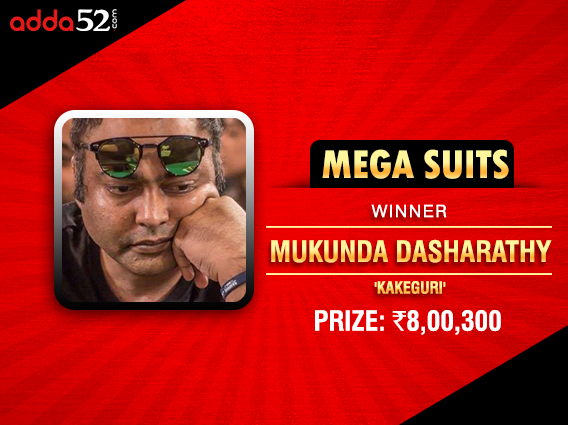 
A small technical difficulty saw the Adda52 Godfather Finale getting cancelled this Sunday evening, but there were still plenty of high-value tournaments to look forward to on their platform. This included the Mega Suits and the Adda52 Millions, the latter being shipped by Anik Ajmera for around INR 5 lakh.

The Mega Suits INR 30 lakh GTD tournament is an extremely popular one on Adda52, with a buy-in of INR 5,500. Of course, there’s a lot of money at stake and a total field of 604 entries (353 unique +251 re-entries) took part in this latest edition, where Mukunda Dasharathy emerged victorious from a very tough field indeed.

Dasharathy was awarded the massive first-place prize of INR 800,300, playing under the name ‘Kakeguri’ on Adda52. The Bangalore-based player has regularly cashed in top tournaments over the years and this would’ve been one of his biggest wins, beating Ravindra Arikeri aka ‘vickyarikeri’ in heads-up.

Gutshot caught up with Dasharathy after this big win. He said, “It feels really good to win such a big tournament. The tournament structure on Adda52 was really good and this became my biggest score on their platform. Immediately after the bubble, I managed to move into the chip lead by winning a couple of big hands. Thereafter, I didn’t look back. I remained chip leader almost till the end, and eventually won the tournament.”

Second-place finisher vickyarikeri also took away a handsome prize of INR 4,59,040 for finishing second. In the final hand, Dasharathy held Qc 6d against vickyarikeri’s Ac 9c as both players had their chips in the middle and the board ran out 8d 10s 10c 6h 4d. Dasharathy won with a pair of Sixes. Another top player in contention was Arjanveer Chadha aka ‘arjan30’ who ultimately finished third for a prize of INR 3,32,200.

Keep reading GutshotMagazine.com for more updates on the biggest Indian poker tournaments and promotions across all platforms.