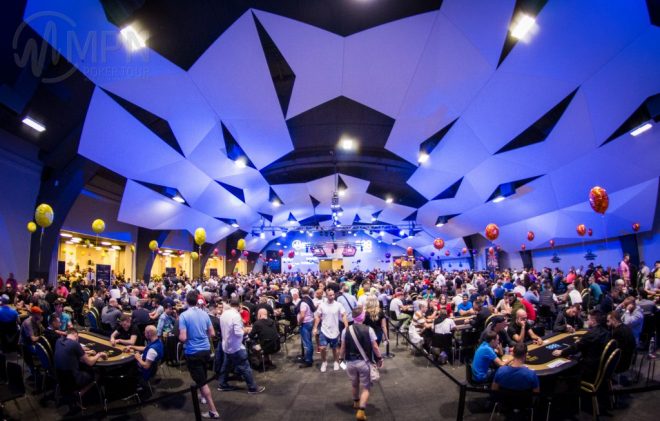 
The MPNPT @ Battle of Malta returned to the Eden Arena at the InterContinental Hotel yesterday to play out the last two starting flights of the Main Event. The combined Day 1a and Day 1b fields already comprised 1,855 entries – but Day 1c almost overwhelmed the facilities, as well over a thousand players had registered before the start of play, and a large number of alternates milled around the bar while the registration queue still snaked out into the hallway.

By the close of registration at the end of Level 10, Day 1c had garnered 1,548 entries – just as the turbo-format Day 1d was beginning. Day 1d added another 412 entries to the total, and the final numbers for the Main Event came to 3,815 – almost twice the previous record for a tournament in Malta, which, incidentally, was this event last year. The record-breaking field generated a total prize pool of €1,850,750, completely eclipsing the €1,000,000 guarantee.

Day 1c chip leader at the close of play was Ondrej Jacubcik on 632,000; Flaviano Cammisuli topped the Day 1d chip counts with 808,000, which gives him the overall chip lead going into Day 2. A total of 572 players progress from the four starting flights to today’s Day 2; all of them are already in the money, with first prize expected to be worth over €350,000.

Away from the tournament area, eligible MPNPT qualifiers were treated to air hockey, PlayStation and complimentary refreshments in the VIP Chill Out Area adjacent to the Casino Malta. This was also the venue for the ever-popular Live Fish Party sit’n’go, where players spin for the chance to play for prizes, including a jackpot prize of a package to the next MPN Poker Tour festival in Tallinn, in January 2019.

Day 2 of the Main Event kicks off later and you can get all updates on the series here at GutshotMagazine.com.