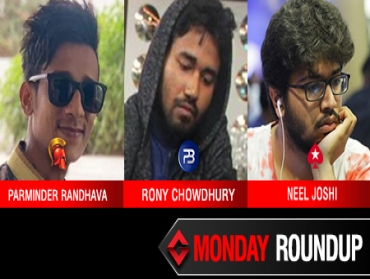 
The online contenders were charged-up after a thundering Sunday night across the online felts. Once again, Monday pounced to crush the promised amounts and the players came out winning big! Spartan ReCharge was a part of the ongoing IOPC displaying INR 14 Lakhs GTD, followed by PokerBaazi’s The Bout, Inception on Adda52 were other bigger guarantee tournaments on Monday night. And here is a complete summary of the daily majors…

Spartan Poker’s Monday feature ReCharge INR 14 Lakhs GTD was a part of the biggest poker series in the country India Online Poker Championship (IOPC) which enrolled 1,010 runners after each one paying INR 2,200. This incredible number saw the assured amount being crushed to create a prize pool of INR 20.20 Lakhs, a slice of which was taken away by the top 87 finishers. Parminder Randhava playing under the username ‘Bounceez’ took down the Monday major after beating the 2020 India Poker Champion Rubin Labroo aka ‘kornkid’ in heads-up to capture the valuable title.

Outlasting a field of 301 entries was Rony Chowdhury aka ‘bisadip176’ who took down last night’s The Bout INR 10 Lakhs GTD. Each player paid INR 4,400 which led to the creation of a higher prize pool of INR 12 Lakhs and the top 36 players earned quite well for their efforts. However, Chowdhury locked INR 2.65 Lakhs after defeating Amarjeet Singh aka ‘ninjakar’ in heads-up. The runner-up walked out with INR 1.86 Lakh.

Once again, the guarantee was surpassed on Adda52’s Monday feature, Inception INR 10 Lakhs GTD. A total of 366 players registered themselves for a buy-in of INR 3,500. And the top 38 places finished in the money earning a min-cash. Topping the list and claiming the first-place prize money was Harshit Chopra aka ‘hashstack’ who took down the tournament railing out ‘rajatsahni’ in heads-up to boost his poker bankroll by INR 2.56 Lakhs. The latter managed to take home INR 2.13 Lakhs.

Marking a successful end to the Winter Series on PokerStars, yesterday hosted Monday Hustle INR 5 Lakhs GTD. With each one paying INR 3,300, a total of 181 hopefuls took their seats which made the advertised guarantee surpass. The top 31 places received a share from the newly created prize pool but the one to grab the largest piece was popular circuit grinder Neel Joshi aka ‘Worm236’ triumphing the Monday headliner and pocketing INR 1.07 Lakh as winner’s prize money after eliminating ‘hzgod’ in heads-up who also earned INR 80,500 for resting in the runner-up position.