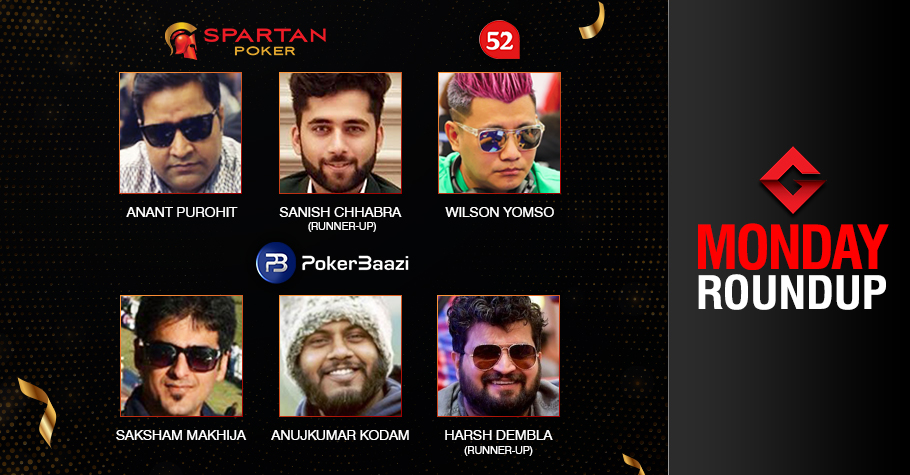 
Mondays are less exciting compared to Sunday tournaments across the major online poker sites in the country. In today’s Monday Roundup article we will cover flagship events from Spartan Poker to PokerBaazi and Adda52 to PokerStars India. So, stay tuned to unveil the champions of last night. Let’s begin!

Spartan Poker’s Monday signature tourney INR 12 Lakh GTD ReCharge displayed a buy-in of INR 2,200. A total of 580 runners booked their seats aiming for the first-place cash prize. The top 55 players strolled out with a min-cash of INR 5.8K. It was the man who needs no introduction, the rising star Anant Purohit aka ‘Pro’ who championed the field to take home the largest share of the prize pool after defeating Sanish Chhabra aka ‘Sanish21’ in heads-up.

After the 3rd edition of Game Changer, Monday’s star attraction on PokerBaazi was The Bout INR 10 Lakh GTD. The INR 2,750 buy-in event clocked in 426 entries with 54 players locking min-cash. Racing ahead to capture the title was Saksham Makhija aka ‘AshokHanda’ who defeated Harsh Dembla aka ‘100crdream’ in heads-up and seized INR 2.14 Lakh in top prize. Dembla took home INR 1.5 Lakh for settling in the runner-up position.

Online grinder Anujkumar Kodam aka ‘aatmaan’ took down Monday MegaStack INR 2 Lakh GTD on PokerBaazi. The tourney saw a small field of 87 entries and the top 9 players finished ITM. Kodam outlasted ‘DEEPAKALLIN’ in heads-up play and clinched to the top prize of INR 60,000 while his opponent managed to walk out with INR 42,000

The INR 3,500 buy-in Monday marquee event, Inception boasted INR 10 Lakh GTD on Adda52. The event logged in 350 entries and ultimately it was Wilson Yomso aka ‘Kaling’ to come out on top. The last man standing earned INR 2.05 Lakh in first prize only while his opponent ‘GiggsyBet’ settled in the runner-up position for INR 1.84 Lakh followed by ‘xwink’ in the third place for INR 1.83 Lakh.

Last night PokerStars India hosted Battle Royale INR 8 Lakh GTD attracting as many as 274 entries. This led to the creation of a regular prize pool of INR 4.57 Lakh and bounty prize pool of INR 3.42 Lakh. For eliminating each player, a bounty of INR 625 was awarded. The event concluded with a 4-way deal which saw ‘DarksideOf82’ coming out on top and grabbing INR 69,843 in first-place prize money while ‘yash1805’ settled in the second place followed by ‘groovemantra’ in the third place and ‘ijaydc’ in fourth place.