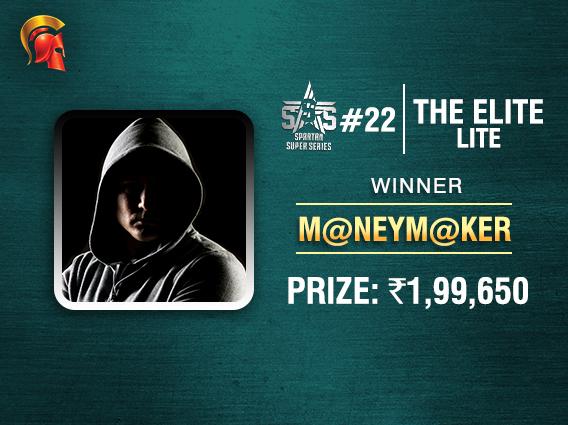 
The Spartan Poker has been a very happy hunting ground for ‘M@neyM@ker’ in the last week or so, with a few wins in the ongoing Spartan Super Series (SSS). He won the second event of the series and even led the leaderboard for the first couple of days, winning the last event of SSS Day 2 as well.

Yesterday was Day 5 of the series and the competition is heating up on the SSS Leaderboard, where INR 10 lakh is being given away including the top prize of INR 4 lakh. M@neyM@ker won his third title of the series yesterday, when he shipped the opening tournament of the day – SSS Event #22 The Elite (Lite) INR 7.5 Lakh GTD.

In the final hand, both players went all-in before seeing the flop, with suckout_king holding 5s Ac and M@neyM@ker holding Ah 9c. The board opened Ts 6h 7h Ad Qd and at the end of the tournament, both players hit a pair of Aces, but M@neyM@ker took down the title with a higher kicker, Nine.

Gutshot caught up with the winner after he picked up his third SSS title. He said, “I am extremely delighted that the results have started coming in my favour. I have been facing huge downswings from last few months but putting time in studies did help me to make a comeback. You need to trust your instincts and play for the title win because cherry is at the top only. Also, you need to put volume to overcome variance. Still early days for me and a long way to go, I will try to learn and keep improving my game. Self-belief and hard work will always earn you success.”