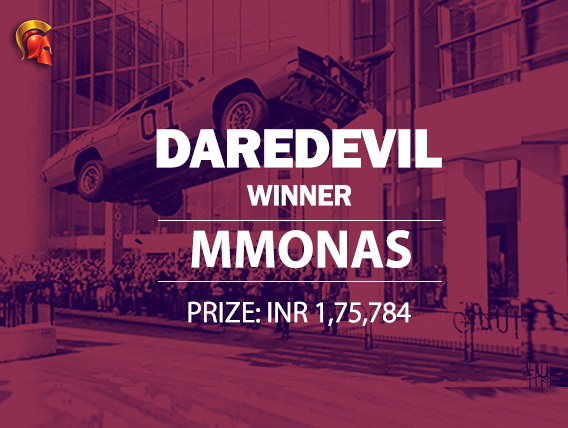 One of the most awaited tournaments of the week at The Spartan Poker takes place on Saturday evening. The DareDevil guarantees a prizepool of INR 6 Lakhs for a buy-in of INR 4,400. While this is a rebuy tournament, an interesting twist is that anyone who gets busted and rebuys is able to do so at INR 2,000 so value seekers gravitate towards this weekend tournament. The guarantee was easily crossed settling at INR 6,88,000 and the player who gained the most by the end of it all was ‘mmonas’ who took down the DareDevil and first place prize of INR 1,75,784.
A total of 101 entries participated in the tournament which is part of the daily featured tournaments that takes place at Spartan. In case you are unaware, there is a Hot Tournament Leaderboard challenge which is now heading to the finish line at the end of the month. The top 10 finishers of the leaderboard are playing for a share of INR 15 Lakhs of which INR 5 Lakhs is going to the leaderboard topper! So plenty to play for and you still have 4 days of tournaments available to play and earn those precious points.
Coming back to the DareDevil, mmonas and ‘Strangeplay’ were the two final players who went into headsup. Strangeplay had almost exactly half the stack of mmonas when the final hand took place in Level 39 (20,000/40,000 ante 4,000). Seizing the advantage of his chip stack mmonas with suited cards (Ks Ts) decided to force Strangeplay to play for his tournament life by going all in. Holding a premium hand like As Js, Strangeplay did not hesitate and made the call. Unfortunately the board of 5h 4c 3c 7h Td favoured the chipleader giving him a pair of Tens of the river and the title of DareDevil. Strangeplay will have to be content with his runner-up payday of INR 1,21,088.
Stay tuned to GutshotMagazine.com for more such updates from the online and live poker felts from across the world.