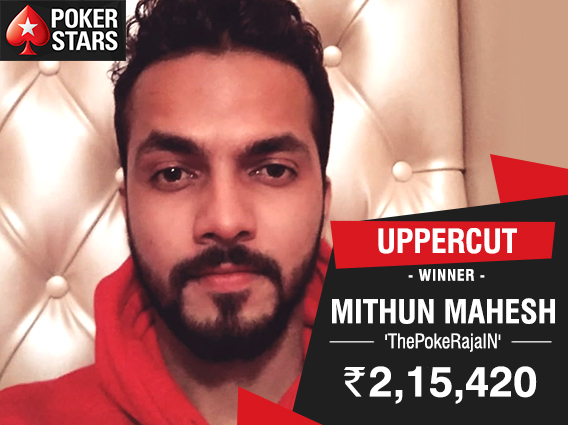 
Every Friday night, PokerStars India hosts a tournament called Uppercut – Progressive KO INR 10 Lakh GTD. The tournament is popular for plenty of reasons, one being that it is played in the 6-Max format. Last night, while most of us would’ve decided to go out and enjoy the weekend, poker pro Mithun Mahesh decided to stay in and earn a few extra bucks.

Surely, he was successful at earning these few extra bucks, having gone through a packed field to emerge victorious in the tournament, beating a total of 214 entries. The bounty tournament began at 8pm last night and went on till 3:10am this morning, meaning a long and gruesome grind of over 7 hours.

The top 41 players were paid out eventually from the tournament prize pool with a minimum cash of INR 4,350. Yes, that is lower than the INR 4,400 buy-in but that’s the beauty of bounty tournaments, wherein you can win bounty prizes in addition to the tournament prizes.

Many top names were a part of the top pay-outs, including Red Spade ambassador Aditya Agarwal, who busted in 28th place a day after he took down the PokerStars India HighRoller. Arjan Chadha aka ‘ballistik30’ was another top name who finished in the money (22nd), a day after he emerged as one of the top stacks in NPC Day 1A on Adda52.

Rajat Sharma aka ‘sharabikebabi’ finished 17th and Rahul Sengar aka ‘LaughingBoddha’ finished 7th, a couple of days after the latter shipped Wednesday Stars. Eventually however, after beating a few more top names on the Final Table, Mahesh emerged victorious to take away the top prize of INR 1.05 Lakh in prize money, in addition to another INR 1.09 Lakh as bounties.

In heads-up, he beat Vivek Singh aka ‘Mystic Peaks’ who took away a decent prize of INR 1.2+ Lakh for finishing second and this guy is making quite a name for himself too. Just the previous day, he chopped the HighRoller with Adi Agarwal and here, once again, finished in 2nd place. In third was Bunty Batra aka ‘hiteshbhai999’.

The competition keeps getting better in these daily featured tournaments on PokerStars India and we expect similar action on their platform over the weekend. When Gutshot contacted Mahesh after this win, he said, “It was fun experience overall. Also, got to play the FT with a player I admire – our PG Star Vivek Singh.”

Mahesh is an upcoming star player and Gutshot recently caught up with him to know his journey from low stakes to poker pro, which you can read here. Also, keep following GutshotMagazine.com for all things poker, in India as well as the rest of the world.