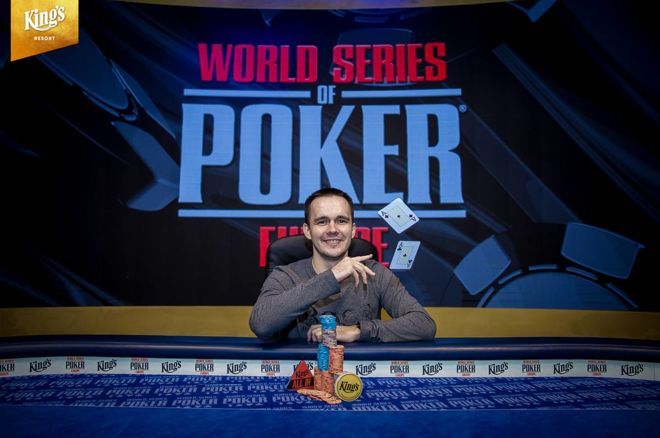 
It has been an amazing 2018 for Mikita Badziakouski and it shows no signs of letting up for the player from Belarus who claimed yet another title, this time at the 2018 World Series of Poker Europe (WSOPE). Badziakouski triumphed in the Short Deck poker event which was one of the side events taking place alongside the ongoing WSOPE at the Kings Casino in Rozvadov, Czech Republic. This is not the first time that Badziakouski has won a Short Deck event and he can truly lay claim to being King of this format collecting €213,750 (~INR 1.78 Crores) for his latest win.

Short Deck Poker as a format has been around for a couple of years so it is still relatively new in the poker world. The game plays exactly like Texas Hold’em except smaller cards from Deuces to Fives are not a part of the playing deck. This leads to a small changes in the hand rankings (e.g. a straight is ranked higher than a flush) and of course one need to use modified strategies while playing this game.

Short Deck Poker’s popularity is particular high in Asia where highrollers enjoy this game and it was also initially promoted by the likes of Phil Ivey and Tom Dwan who spent a lot of time in Macau at the high stakes tables where they picked up the game.

Coming to Badziakouski, it was back in August, that the Belarusian player outlasted 55 players to lay claim to the HK$2,000,000 Triton Jeju Main Event title for a payday of US$5.2 Million (~INR 38.5 Crores).

He also won the HK$1 Million Main Event at the 2018 Triton Super High Roller Series Montenegro for just under $2.5 Million as well as making two final tables of Short Deck events in Manila, Philippines for $219,256 and $52,650 respectively. 2018 alone saw Badziakouski make over $12.6 million and currently his Lifetime earnings have crossed the $18.8 million mark. By far he is highest earning Belarus player and is also 22nd on the worldwide money listings.

The €25,000 buy-in Short Deck event at the Kings Casino saw nine unique entrants purchase six re-entries between them, to create a prizepool of €356,250. Short Deck regulars Richard Yong, Winfred Yu and Paul Phua were among those who failed to make it heads-up where the prize money was awarded. Wai Kin Yong, Choon Tong Siow, Wai Leong Chan and King’s Casino owner Leon Tsoukernik were the others who took part but fell short. Badziakouski was up against Ivan Leow in headsup. Leow has also been in great form in recent months but it seemed destined that Badziakouski would take down the title in this format.

The WSOPE and its other side events will continue till this weekend and there is one more Short Deck event on schedule so who knows we could be talking about another title going Mikita Badziakouski’s way. For all that and more keep visiting GutshotMagazine.com!