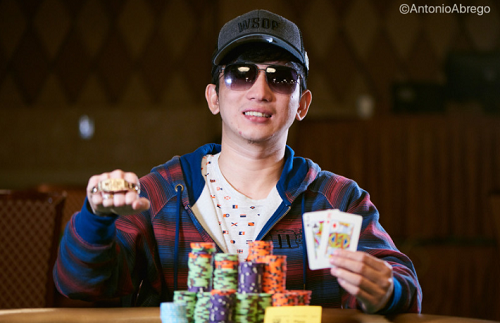 
History was made once again at the 2018 World Series of Poker, with Mike Takayama becoming the first Filipino to win a WSOP gold bracelet. He beat a massive field of 2,065 entries and took home $198,568 for first place, shipping Event #59: $1,000 NLHE Super Turbo Bounty.

The pro has been a regular in various Asian tournaments, with several titles and big scores to his name. However, the participation is lower in Asia tournaments and so are the prizes, so Takayama decided to fly down to the World Series and he tasted success, winning his first gold bracelet, and first for the country too.

After this career best win, he now has over $850k in live poker winnings. He defeated Italian poker player Lorenc Puka in heads-up, who also walked away with a career best $122,627 for second place. The Super Turbo Event saw over 2,000 entries being busted, all within one day’s play.

“I’m very happy with how I played, and it is everyone’s dream to win a bracelet. Two suck-out hands then I kept building and building. I am now the first Filipino to ever win a bracelet,” said Takayama after this historic win. This was his second 6-figure score in his live poker career, following the $105k he earned for shipping the APT (Asian Poker Tour) Manila Main Event title in April last year. Earlier today, Nikita Luther also created history by bringing home India’s second gold bracelet.

Keep reading GutshotMagazine.com for more updates on the 2018 World Series of Poker.