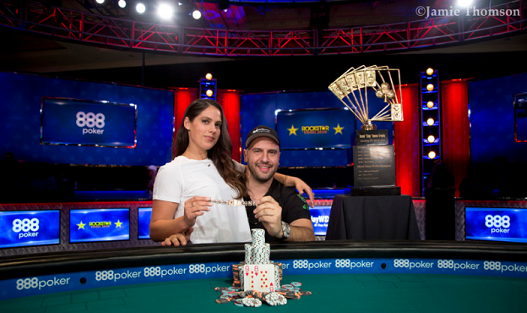 
He was chip leader through Day 2, Day 3 and Day 4 of this prestigious event and if there was anyone who truly deserved to go ahead and win the title, it was USA’s Michael Mizrachi aka ‘The Grinder’. The 37-year old pro went on to win his third WSOP Poker Players Championship, an unprecedented achievement.

Event #33: $50,000 Poker Players Championship kicked off 5 days ago at the 2018 World Series of Poker in Las Vegas and a tough field whittled down to the final six that walked out to play on Day 5 of the tournament, with just one player among them that hadn’t won a bracelet in the past.

He got rid of his competitors on the final day and took home a massive prize of $1,239,126 for beating the 87 entries that registered to this event. “It’s quite an accomplishment. To win the first one was amazing. The second one was great. The third one is unheard of,” said Mizrachi after completing this record-breaking win and receiving his fourth overall WSOP bracelet.

He defeated John Hennigan in heads-up, who recently won his 5th WSOP bracelet and was on a pretty hot run himself, completing his fifth cash of the series. This win took Mizrachi’s career live poker winnings to nearly $17 million and people rushed on to the WSOP stage to yell “Grinder, Grinder, Grinder” after he completed the victory.

Mizrachi began heads-up play with a slight chip lead. In what became the final hand, the flop opened Qh-9s-5h and both players went all-in. Hennigan held Jd-10c with a straight draw, while Mizrachi held 9h-8h with a pair of nines and a flush draw. He hit 10h on the turn to complete a flush and even though 8d completed Hennigan’s straight on the river, it was of no use.

Keep reading GutshotMagazine.com for daily updates on the ongoing 2018 World Series of Poker.