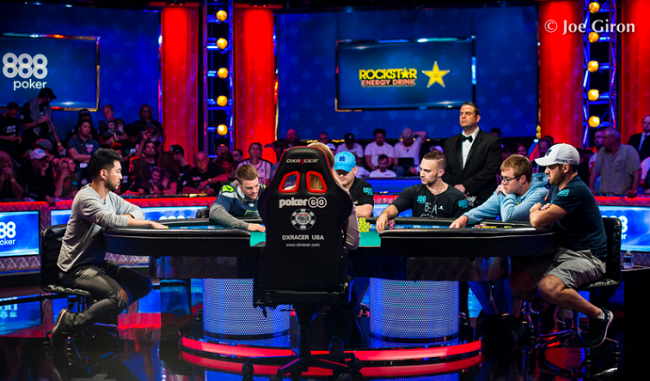 
The most prestigious poker tournament in the world is the 2018 World Series of Poker $10,000 Main Event, and we’ve reached the end of Day 8 of this tournament. The day began with 9 players and after many hours of play earlier today, only three players were eliminated, with the final 6 bagging up to resume on Day 9.

The players will be playing very tight now that it has reached this stage and every bust sees a massive pay jump. The last person to bust his stack was Alex Lynskey who took home $1.5 million and the next to bust tomorrow morning will get paid out a massive prize of $1.8 million. Eventually, the winner will take home a life changing prize money of $8.8 million.

The final players are all American and so far, the favourite to win this tournament is Michael Dyer, who has built a commanding chip lead over the rest of the players on the final table. He currently has 156,500,000 in chips which is more than double the next best’s 72,250,000 chips – Nicolas Manion. It’ll be a great win for Dyer if he does manage it, given that he has less than $100k in previous live poker winnings.

The only previous bracelet winner in the mix to be crowned the 2018 World Champion is Joe Cada, who won the same tournament in 2009. He currently has 29,275,000 in chips and it’ll take quite an effort from him tomorrow to build on this stack. However, he believes that he can go all the way, saying he’s had a smaller stack right through the tournament.

“It’s been a long time so you kind of forget a lot of those feelings. I’m just happy to be here. It’s been a gruelling tournament. I’ve been lucky to even be in the spot that I’m at. I’ve had low chips the entire tournament, so I feel like I’ve just been hanging in there,” said Cada about reaching this stage for the second time in his life.

Keep reading GutshotMagazine.com to see which of these six players go on to win the 2018 WSOP Main Event.