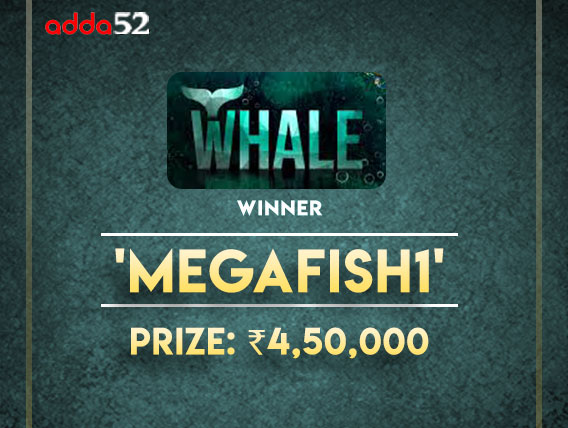 
Don’t be fooled by that name ‘MegaFish1’. This player is no fish at all, featuring in several final tables and leaderboard competitions on Adda52, one of India’s top online poker platforms. Yesterday too, he topped a packed field to ship a tournament on Adda52 and walk away with big prize money.

Adda52 hosts the Whale 6-Max tournament every Friday night at 8pm, a high buy-in tournament that clashes with The Elite on Spartan (won by Wilson Yomso). Only some of the best players in the country play in this INR 7,500 tournament and yesterday, ‘MegaFish1’ was unbeatable in the tournament, taking away the top prize of INR 4.5 lakh.

193 entries registered to the tournament last night, narrowly missing out on the INR 15 lakh guarantee. Only the top 12 from this field was ultimately paid out a minimum cash of INR 26,250 and MegaFish1 won the biggest prize of all. He beat Arjanveer Singh Chadha aka ‘arjan30’ in heads-up, who settled for the runner-up prize of INR 2,85,000.

Chadha had a brilliant night in poker, shipping The Elite Lite, cashing out in The Elite and shipping the Triple Bubble tournament as well on Spartan, later wrapping up the night with this runner-up finish in Whale and narrowly missing out on a hat-trick of major titles in one night.

These players were rewarded well for completing such a long grind of over 8 hours, with the tournament eventually ending at 4:12am this morning. Finishing in third was another top player in Sahil Agarwal, who goes by the name ‘Bhaijiii’ on Adda52, and is a player who has several achievements in online and live poker. Also finishing in the money was Pranav Bang, who won The Summit on PokerBaazi just the previous night. Keep reading GutshotMagazine.com for more regular updates on the top Indian poker tournaments.