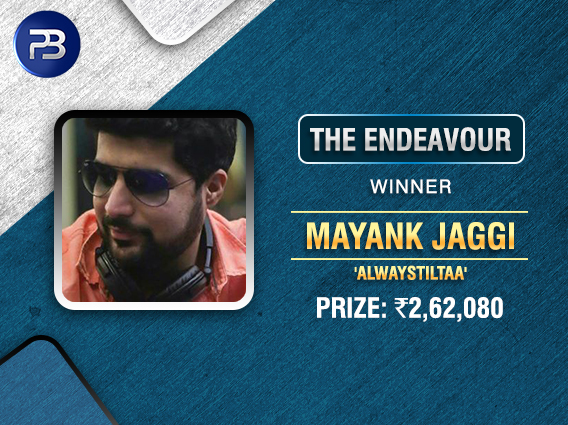 
The Endeavour INR 10 Lakh GTD is without a doubt, one of the most popular daily featured tournaments on PokerBaazi. It’s a tournament where the guarantee is almost always beaten, and one which poker players mark on their calendars – “Every Tuesday night. 8pm. PokerBaazi.”

Last night was another edition of The Endeavour and once again, it saw a resounding participation of 384 entries (224 players + 160 re-entries) that beat the guarantee and increased the prize pool to INR 13.44 lakh. The tournament has a buy-in of INR 3,850 and yesterday, the top 35 players were paid out a min-cash of INR 13,440 – more than triple their original investments.

As Gutshot scrolled through those who finished in the money, we saw a lot of PokerBaazi regulars and it couldn’t have been an easy field to get past. Scoring minimum cashes were the likes of Rohit Mishra aka ‘rohit22rm’, Rubin Labroo aka ‘kornkid’, Harsh Dembla aka ‘dembla’, Abhinav Iyer aka ‘griezmann’ and Rajat Sharma aka ‘LungFakeer’.

More known players made deep runs as the competition got intense towards the latter stages of the tournament. Sahil Mahboobani aka ‘ImHighIShove’ busted in 13th place while Prince Singh aka ‘NaNki’ hit the rail in 14th right before Mahboobani. However, the player who braved through them all last night was Mayank Jaggi aka ‘alwaystiltAA’.

This man needs no introduction as he has plenty of live and online poker achievements, adding another to his tally last night. He bested this field including Rajesh Kumar Shukla aka ‘intervntion’ in heads-up, to take down the title and the sweet first-place prize of INR 2,62,080. Shukla has also been on a good run recently and he added INR 1,94,880 to his bankroll last night for finishing second.

Gutshot congratulated Jaggi after this big victory and asked him about the journey. He said, “Thanks. The tournament structure was great. It stayed deep right till the end. There was tough competition from the likes of Bahu Bali (“intervntion”) and others, but overall, it was a nice experience.”