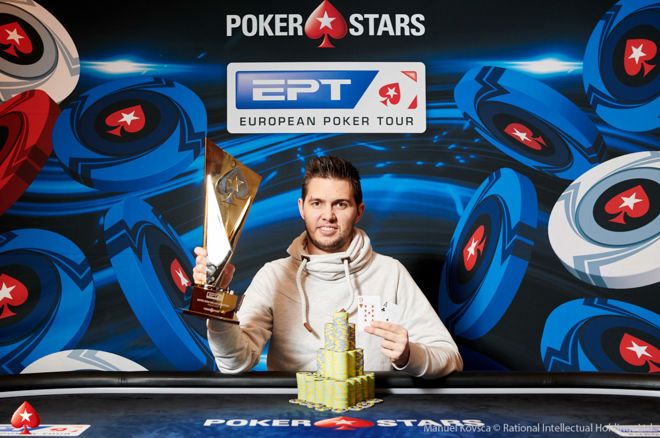 
PokerStars LIVE is currently hosting the 2018 European Poker Tour (EPT) at the Casino Atrium, in Prague. The festival is a 12-day high-stakes extravaganza, where players from all over the world are signing up for the action-packed events. The festival already saw some of the winners emerge, including Akin Tuna winning the €10,300 NLH Event and Israel’s Boris Mondrus winning the EPT National.

The €50,000 EPT Super High Roller (SHR) is also another high-stakes feature tournament that saw its champion being crowned yesterday. Total entries the event drew were 40, out of which 14 played on Day 2 along with 12 late entries, which included Finnish pro Patrik Antonious, straight from his trip to India. The field eventually whittled down to final 4, who played action-packed poker yesterday for the title and cash. 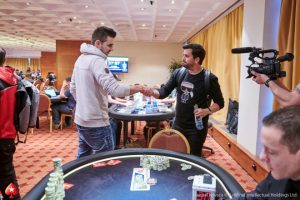 The person to ship the high value EPT SHR though, was the Austrian pro Matthias Eibinger, who was also the chip leader entering the final day. He finished in style, entering the day with the most chips, dropping down to lower depths and rising from the ashes like a phoenix to ship the prestigious title and take home the 1st place cash prize of €653,000 (~INR 5.31 Crores).

Eibinger started the day with over 50% of the total chips in play, but with other three players on a pretty even chip count, there was a lot of action to be seen. Although Eibinger ultimately emerged victorious, it was anything but easy for him.

Andras Nemeth, the chip leader entering Day 2, gave Eibginer a tough fight all through the day. In the third hand of the day, Nemeth doubled up against Eibinger, winning with his superior Ace-king to Eibinger’s Ace-five. A little while later, Nemeth creeped up closer, almost even in stacks after winning with a top set against Eibinger’s failed bluff.

Nemeth was on a roll, when he busted the Moldovian Pavel Plesuv with Ace-ten hitting ten on the flop against Plesuv’s Ace-king. Next, he proceeded to bust Liang Xu with eight-nine against queen-eight (nine on the turn). Entering heads-up with 6.7 million chips to Eibinger’s 3.3 million chips, Nemeth manged to pile up a 9:1 chip lead a little while later. He seemed determined to lift the trophy and win the biggest cash of his career. But things were not to be the same again for the hopeful soul.

Nemeth lost a series of pots to Eibinger. In the last hand, Nemeth got it all in with his Ace-ten. Eibinger called with Ace-nine. A nine hit the river and made Eibinger the winner. Nemeth sighed and sportingly shook hands with his opponent.

Before this win, Eibinger already had already stockpiled a massive amount of $4,026,169 in live tournament winnings in just 2018. This win is still not his biggest win. His biggest live win was earlier this year at the World Poker Tour (WPT) Tournament of Champions Festival 100K High Roller, where he finished 2nd and took home a staggering $1,006,060. He is 2nd in Austria’s All Time Money List, and with this phenomenal end to the year, the poker gods must have already lined up an exciting 2019.