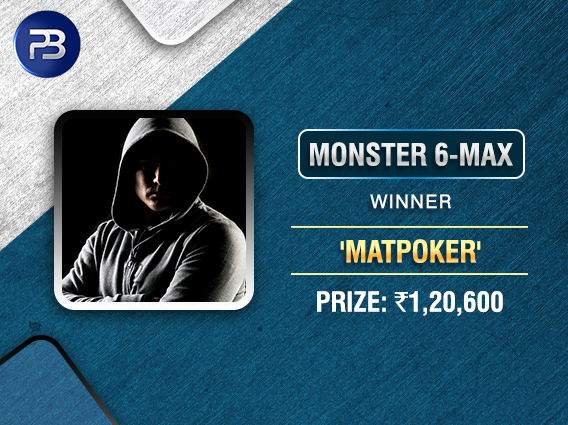 
Rajat Sharma is a well-known poker pro in the Indian circuit, with quite a few cashes in major live as well as online tournaments over the years. In the last 2-3 months, he has been winning several titles on Spartan where he plays under ‘Garammasala’, while he has also been making deep runs on other websites like PokerBaazi.

Last night, Sharma took part in the Monster 6-Max INR 5 lakh GTD tournament on PokerBaazi, which was like a little warm up before the major Sunday grind tournaments began. The tournament was an INR 2,750 buy-in one which began at 5pm as it does every Sunday.

Yesterday, a total of 201 entries (including 87 re-entries) joined the tournament which led to the promised guarantee being passed by a little bit. The top 17 players were paid out a minimum of INR 10,050 in this tournament, with quite a few known faces finishing in the money.

Sharma reached heads-up last night as well but wasn’t able to get past one player on the night. He eventually lost to ‘matpoker’ in heads-up at 10:55pm last night, with the latter taking away the top prize of INR 1,20,600. matpoker was the only player to get a 6-figure score while Sharma, who plays under the name ‘LungFakeer’, came second for INR 85,425.

Vinay Rajpal aka ‘vinay09’ finished in 4th place in this tournament was INR 45,225 while the very well-known pro Mayank Jaggi aka ‘alwaystiltAA’ finished in 5th place for INR 35,175. A few other known players finished in the money, but none would’ve been happier than matpoker after this victory.

Featured tournaments take place daily on PokerBaazi and it’ll be interesting to see if we hear more about this player in the days and weeks to come. Either way, you can keep reading GutshotMagazine.com for all updates on India’s biggest poker tournaments.