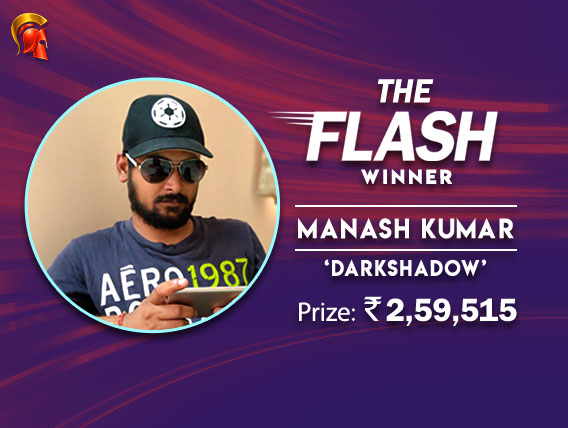 The pre-weekend grind got off to a good start for 31 year old Manash Kumar, as he claimed victory in the Flash at The Spartan Poker last night. For his win, Kumar who plays online as ‘Darkshadow’, was awarded a sum of INR 2,59,515.
The Flash is an INR 10 Lakh guaranteed tournament which features a buy-in of INR 4,400. Last night though that guaranteed got crushed when 208 entries took it to just below 14 Lakhs, INR 13,96,000 to be precise. From the 208, only the top 31 places would get paid out with min cash being INR 12,284. When action whittled down to 3-way, it was Darkshadow (1.3 million chips) up against ‘Strangeplay’ (969k) and ‘Immortal killerr’ (341k). It was only a matter of time that Immortal killerr would put it into the middle and he did just that with his pocket Fours (4c 4s) and Darkshadow made the call with Ah 5h. The board of 8c Kd 3s 5c 3h gave it to Darkshadow on fourth street and Immortal killerr was eliminated in second runner-up for INR 1,40,158. The headsup players played one more hand before they made an ICM deal which gave Darhshadow 2.59 Lakhs and Strageplay took INR 2,34,528 for second place. Gutshot caught up with the Bangalore-based poker player for a quick chat and here are the excerpts:-

How did you start playing poker?
I started playing casual house games with friends.

When did you start playing poker for real money?
It’s been 3 years mostly casual games with friends.

How was your tournament experience playing The Flash tournament?
My experience was good. I got an early double up which helped me stay ahead in the tourney

Key hands from the tournament?
Tx Jx vs my opponent’s Ax Qx when we were the chip leaders. The flop opened Q T J and then a King on the turn got me a complete double up and then just stayed on top right through.  Another hand was when I had Kx Jx suited while my opponent had Aces and I lost a big chunk there as I had an open-ended draw on the flop . Of course the final hand of 3-way action where my Ah 5h which defeated my opponent’s Fours allowed me to get ahead and then win the title.