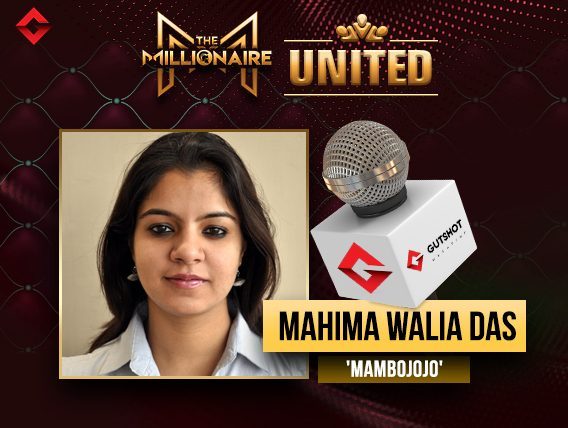 
“The feeling still hasn’t quite sunk in yet,” says the first-ever Millionaire United winner, Mahima Walia Das. Spartan Poker is known to host a bunch of Millionaires each month and it was for the first time that the platform announced Millionaire United INR 1 Crore GTD with a buy-in of INR 7,700. Surprisingly, unlike the other Millionaire tourneys, this was a one-day multi-flight event and we witnessed a prize pool of INR 1.23 Crore!

Day 1A and 1B pulled out a massive field of 1,764 entries and as the night progressed, we eventually saw Mahima clinching onto the prestigious title along with a 7-figure score after beating ‘lazylad’ in heads-up with her pair of Queens and Ace kicker.

The 32-year-old IMT Ghaziabad pass out came across poker in 2015, a year after she married the circuit popular Anirban Das aka ‘pokernoob’ who also shipped Destiny 13.0 Finale last week, winning the exciting Las Vegas package worth INR 10 Lakhs, to which Mahima says, “Anirban has been a frequent winner. I am sure he has much more to go. And I am proud to have done it this time”

Mahima’s taste in poker developed after their marriage when Anirban along with his friend Anant Purohit aka ‘Pro’ would do a lot of hand history analysis together. But being an Olympiad topper in the country, Mahima is no newbie to poker. She already has a couple of titles attached to her name and one of them being Destiny in 2017.

Born in Ambala and currently living in Bangalore, working in a start up called TapChief, Mahima is fond of Urdu poetry and she has also been striking off destinations from her travel bucket list. So, Gutshot caught up with the her asking a few questions about her poker journey, the fantastic Sunday run and how it feels to be crowned Millionaire on Spartan Poker. Keep reading…

Hi Mahima, congratulations on becoming the first-ever Millionaire United winner! How do you feel to be crowned the Millionaire title?

“The feeling still hasn’t quite sunk in yet. I was quite excited to make Day 2 and then really started getting nervous with about 40 players left. The final 2 hours are still quite a blur and the happiness only started an hour or so after the game :)”

At what point of time in the tournament did you believe you could win?

“I did have a massive chip lead when FT started. I was both confident and nervous at the same time at the beginning of the final table. I had to deal with lot of pros. And eventually, confidence took over nervousness.”

Can you share some interesting hands that you played in the tournament?

“I did not land up to Day 2 with a huge stack. I carried about 45,000 in chips which were about 15-16 big blinds. Folded every hand during the short bubble because of how long I had spent on Day 1 but eventually doubled up AQ>A10 to get to about 25 BB and a playable stack with about 80 players left.

Then there was another flip when there were around 60 people left, I had Ace-King and doubled up again against nines, and my stack just kept increasing from there. When there were the last two or three tables left, I do remember a bad beat that I gave, and which got me to 1M+ stack and top 5 stacks with less than 15 players left. I think it was a standard spot where I re-jammed 12 BB with A5s to a button open. The button had AK but somehow got lucky on A5995 run out.”

“Post that, it was pretty smooth and quite an easy game. One hand that I definitely remember is against Pulkit Goyal aka ‘ChampionPlayer’ where I had eights, and he had Queen Nine. The flop was 10 7 and 8. Then comes a six, and then comes another 10 so very standard play again, it was a full house over a straight. Not sure how anybody would have played that differently.”

“Also, when it was around three-handed, I won with Ace-King, and ‘crazyeights’ had King Queen. I got a massive chip lead, and the heads-up session lasted only 3-4 hands since the other person was very short stacked.”

“There was one hand in between where ‘Lazylad’ called on the river with an Ace high anticipating that it was a bluff, that was another big pot which secured my position on the final table.”

With massive prize money up for grabs, there must be high pressure on the FT…

“Yes, I was getting a lot of 3-bets by a couple of players. Multiple times, I opened a hand or would complete by blinds, I was getting 3-bet very frequently there, which is when I decided to play slightly tighter and started to concentrate on the value hands and let go of the mediocre hands all together in between.”

“I’m still sort of a very conservative player. So, I wouldn’t do a lot of experiments. Standard spots, of course, I would not let go of. I also ended up hitting a lot of flops in this scenario.”

“Most of the final table, I was in the chip lead, so I also used a lot of spots to exploit and took advantage of the ICM pressure on the other players. Small stacks, of course, did not have much to lose there, they would play aggressive and the slightly bigger stacks, I had to take care of.”

Let’s talk about your poker life. When and how did you discover this game?

“I got married to Anirban in December 2014 and he had an inclination towards poker. Post-work, he would come back home and start playing poker. At first, it would lead to fights. But eventually I developed an interest for the game as well.”

“My husband has a friend Anant Purohit, who goes by the name ‘Pro’. They were batchmates from MBA and these guys would do a lot of hand history analysis together wherein they would review each other’s hands and I would be a silent observant, and that is when I started to get a better hang of the game. I’ve always been good at maths, I did top an Olympiad in the country, so that’s another thing that got me hooked because the game is very mathematical in nature. A lot of these situations, spots become pretty obvious once you’ve run them N number of times.”

Tell us about your online play? Apart from Millionaire United what are other big wins that you had?

“I was playing some small games and some of the recreational games on Sunday. Like once a month, I would end up playing, but I wasn’t really winning, and I think that’s also true for tournaments because one big tournament you ship, you basically balance out what you’ve spent so far. So, I was definitely not a regular winning player because I was not even putting that kind of volume.”

“Shipping Destiny back in 2017 was my first big win. I have also made it to later stages in Superstack, SSS, Destiny a couple of times.”

Poker in India has mainly been a male-dominated sport. Do you think that’s an advantage or disadvantage? What does the industry need to do to have more female participation?

“I do see an increase in the number of female players of late in the country. I also feel women can do better in the sport as they are more patient and instinctive by nature. People like Maria, Nikita, Muskan, Shuchi, Pratibha are doing their job well to keep the community growing.”

Any plans for this prize money?

“I do plan to donate some of this money for the Coronavirus relief, and I have a plan of doing something of my own eventually at some point in time, so this would probably go in for that. I love to travel. Unfortunately, I cannot do that at this point in time. Yes, we’ll do that soon.”