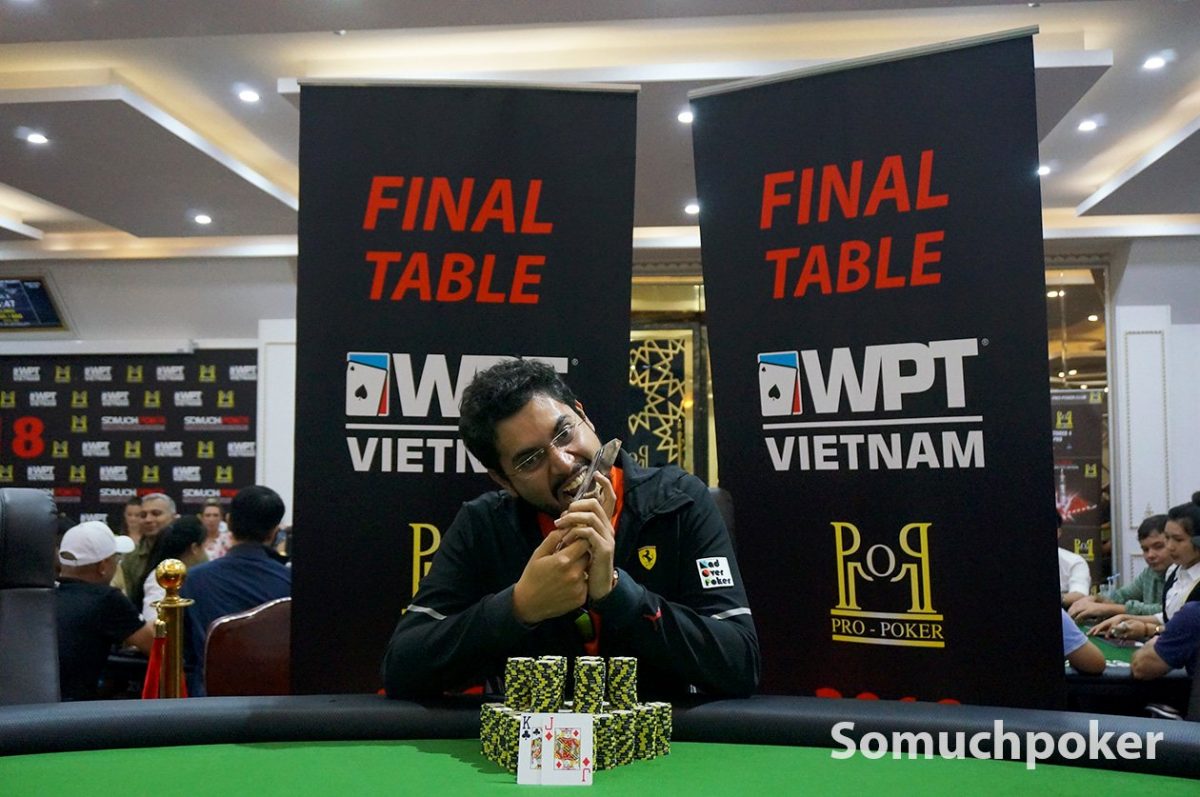 
The 2018 World Poker Tour (WPT) Vietnam is off to a roaring to start at the Pro Poker Club in Ho Chi Minh City and Team India is at the forefront of all the thrilling action. Right off the heels of Sumit Sapra’s deep run in the Welcome Event where he finished runner-up for INR 5.06 Lakhs, MadOverPoker pro Zarvan Tumboli did even better by taking down the Ho Chi Minh Cup to win his career-first WPT title for an impressive payday of INR 7.70 Lakhs (VND 246,950,000).

Tumboli started the day considerably short-stacked with 83,000 in chips but improved his position to eventually make it to the final table alongside fellow countryman Rubin Labroo. While Labroo finished seventh for INR 1.06 Lakhs (VND 34,130,000), Tumboli went head-to-head against Vietnam’s Luat Tran (runner-up for VND 171,400,000) and defeated him to win the title. Dhaval Mudgal, Young Gun Abhinav Iyer and Akshay Nasa were the other Indian challengers who made it to the final day but busted before the final table. Here is recap of the final table.

Malaysian pro Shyh Chyn Lim was the first to depart from the final table in ninth place and was followed by local player Nguyen Hoang Ton in eighth place. Finishing in seventh place was Indian challenger Rubin Labroo who played exceptionally well but narrowly missed out on the top prize. Thereafter, Lee Wei Chan (6th place), Tran Duc Nghia (5th place), Nguyen Vu Thanh (4th place) and Ayman El-Said (3rd place) were eliminated in quick succession before heads-up play commenced between Vietnam’s Luat Tran and India’s Zarvan Tumboli. Tumboli began the heads-up match with 75% of the chips in play. Tran tried his best to bridge this gap and even managed to double up within the first two hands, but his time at the felts lasted just two more hands. On the final hand of the event, Tran jammed with Th & 5h and Tumboli called Kc & Jd. The board blanked out and Tumboli’s king-high kicker was good enough to fetch him his maiden WPT title and obviously the cash prize of INR 7.70 lakhs.

Keep reading GutshotMagazine.com for more updates on the WPT Vietnam.

Don’t have an account on MadOverPoker? If you wish to play and become a big winner of their REHAB INR 5 Lakh tournament and other promotions, sign-up now by clicking HERE.