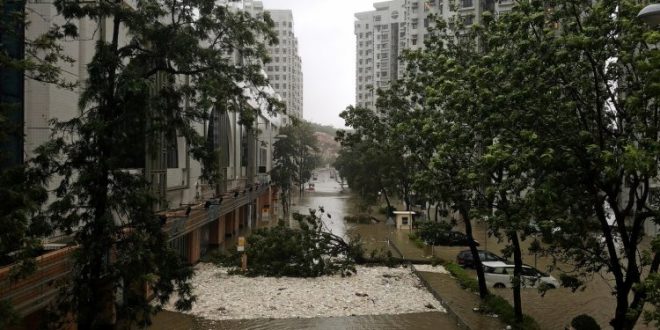 
A T10 Typhoon Mangkhut slammed southern China over the weekend but Macau’s concessionaires confirmed that they had resumed normal casino operations on Monday, having suffered only minimal damage due to better preparations after a similarly powerful Typhoon Hato killed 10 people and caused MOP$11.5 billion worth of damage city-wide. The city was well prepared and the maximum financial losses came from casinos as the were forced shut for 28+ hours at the weekend when GGR is higher than a weekday.

Melco Resorts & Entertainment said its teams were “fully prepared to deal with the effects of Typhoon Mangkhut.”  In the immediate aftermath of Typhoon Mangkhut, Melco Resorts & Entertainment deployed a team of nearly 100 employees to ensure public safety and help beach clean-up efforts, the company revealed late Monday. The employees arrived in Melco’s electric buses and employees from theproperty and construction services department were dispatched to assist the fixing of damaged and dangerous hoarding around the city while another group joined the Macao Government Tourism Office (MGTO) in a clean-up initiative at Hac Sa, Macau’s largest natural beach, to remove rubbish and debris washed up onto the shoreline as a result of the typhoon.

“Our thoughts are with those whose properties have been damaged in yesterday’s typhoon, including those of our employees,” said Melco Chairman and CEO Lawrence Ho. “At Melco, we pledge to assist the government in helping bring about a swift restoration of order to the city. We will do our best to offer help to those in need in community as we further coordinate additional relief efforts in the coming days.”

Despite emerging relatively unscathed from any major physical damage, brokerage Union Gaming said that Macau’s casino closures would inevitably hit their bottom line. “Given that the blanket casino closure happened on an all-important weekend day, which typically generates significantly higher GGR than a weekday, we expect that somewhere between MOP$1.1 billion and MOP$1.5 billion in GGR will be lost,” said Union Gaming analyst Grant Govertsen in a note. “As a result, our initial September expectations of MOP$24.5 billion in GGR, implying growth of 14.7%, is now likely to be closer to a range of MOP$23.0 billion to MOP$23.3 billion, or growth of 7.7% to 9.3%. For the whole of 3Q18, Mangkhut is likely to have up to a 200bps impact on the growth rate, and we now estimate 12% growth instead of 14%.”