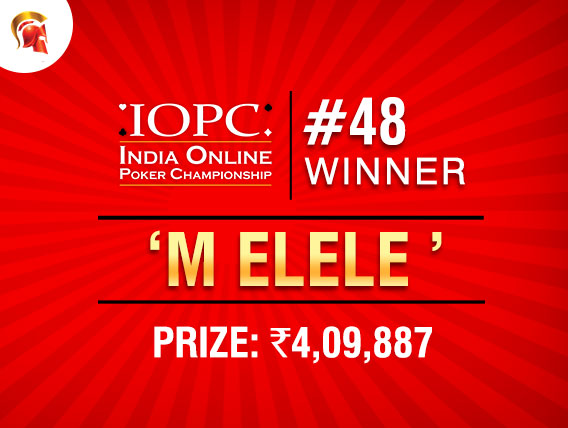 
Saturday night’s final tournament was another value proposition for players in the ongoing India Online Poker Championship (IOPC) taking place at The Spartan Poker. With just one more day of action left in the 10 day series, players were scrambling to get into the action in these last few remaining tournaments. So it was no surprise that that Event #48 saw big big turnout that shot the prizepool well past its guarantee of INR 17.5 Lakhs. Emerging as the victor in this final event on the penultimate day of the series was ‘m elele’ who outlasted 208 entries to claim the title and biggest share of the prizepool.

Day 9’s final tournament kicked off at 9:30 pm and had a buy-in of INR 6,600 which players had to pony up. The afore-mentioned 208 entries swelled up the prizepool to just under 20 Lakhs closing at INR 19,38,000 which would be distributed among the top 17 finishers. Min-cash was INR 17,054 and familiar names like checm@te, chimpoo, pokernoob, Strangeplay, SFTBNIAH and Bikini Babe all made the money but did not progress to the final table. A familiar name on the circuit and who made the final table was Vinay B a.k.a Minimalist who ran deep to finish in 5th place for a score of INR 1,24,807.

The tournament lasted for almost exactly 8 hours and the two players who got together to battle it out for the biggest share of the prizepool and of course the title were m elele (2.5 million) and ‘d00mtr00p3r’ (2.3 million). Given that both players stacks were close to even, it seemed like we were in for a battle. But the headsup battle went on for the better part of an hour which is an incredibly long time in online poker. Both players were involved in over 100 hands with the chip lead changing with every few hands, no quarter given or taken by either player. m elele though eventually found some traction and surged ahead in chips in a hand where both players hit two pair but m elele’s higher two pair was best and got him a pot worth 1.3 million along with a firm lead. He bettered that into a an almost 4:1 advantage over his opponent when the final hand happened. Playing aggressively and knowing his opponent is likely to call with any two, m elele moved his 3.8 million stack into the middle holding a pair 6h 6s and d00mtr00p3r called with Ks 9h. No joy on the board of 7h 7c Jc 2h 8c for the shortstack and with that we had our winner in m elele who claimed the win for a payday of INR 4,09,887 while d00mtr00p3r also picked up a healthy INR 2,75,971 for his runner-up effort.

That was it for Day 9 of the IOPC at The Spartan Poker. Tomorrow is the big day at Spartan’s virtual felts as the 1 Crore guaranteed Main Event of the IOPC takes place. There are 6 additional tournaments besides the Main and we will bring you all the round ups from the final day’s action including who is the leaderboard and Jeep Compass winner! Stay come back right here at GutshotMagazine.com for all that news.